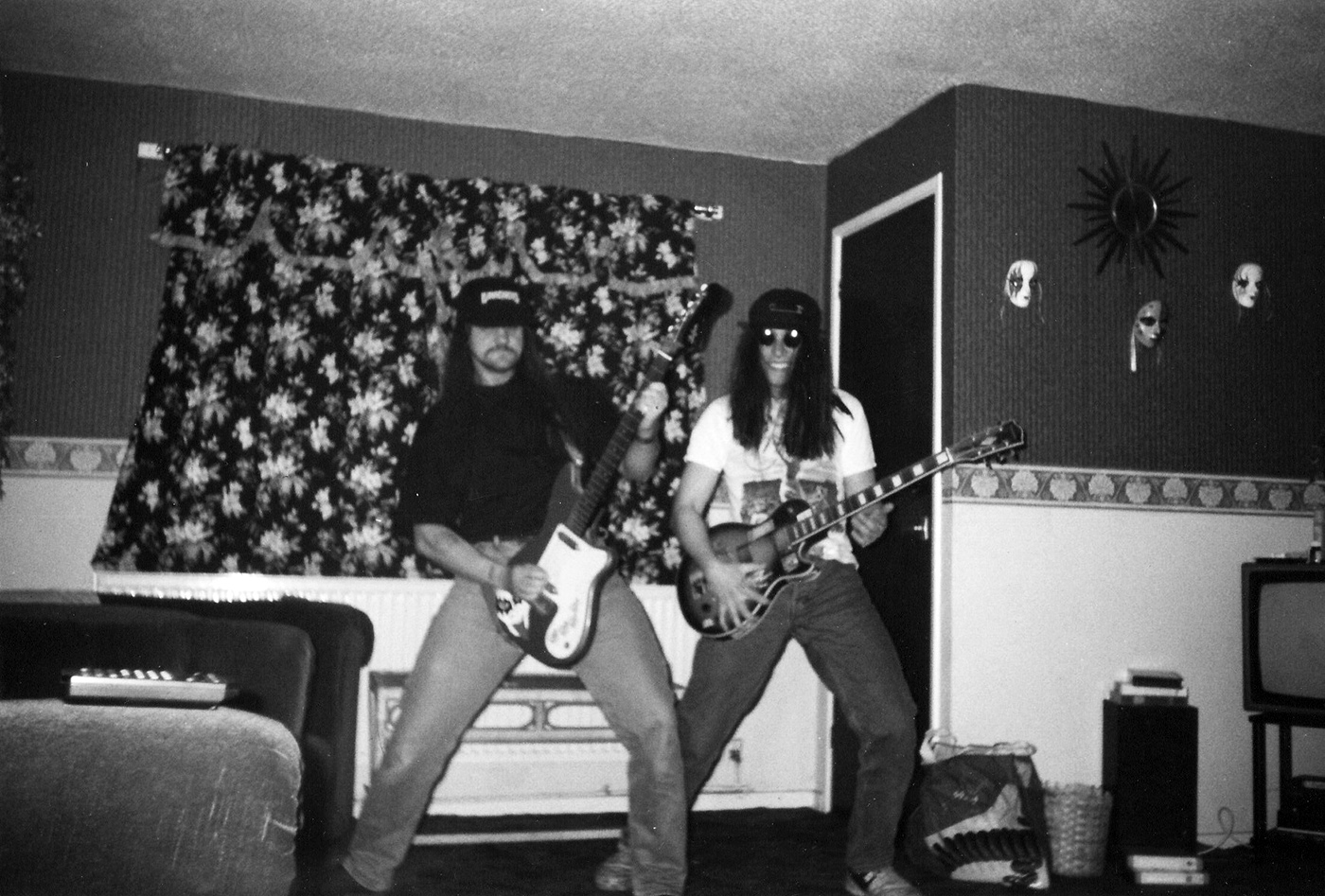 Dick and me in the early 90s. And yes it was a wig and no I couldn’t play guitar.

Music has no boundaries, ‘-isms’, or restrictions: young/old, boy/girl, man/woman, introvert/extrovert, there’s one thing we all share – from the cradle to the grave, music/sound has touched our lives. It makes the bad times bearable, the good times even greater, memories seem like yesterdays, and tomorrows worth waiting for. We don’t ask music into our lives; it invites itself around. As a lifelong gift, it asks only for us to listen and, in return, provides us with pleasure. Ok, so we wouldn’t die without it – though I’m certain it’s kept many alive – but it sure makes our lives a whole lot brighter until we draw our last breath.

It wouldn’t be the same saying farewell to a loved one without their favourite song soundtracking the moment. Imagine the scene: ‘I Did It My Way’ showers its emotive clout over the congregation, making grown men cry when before they had fought back the tears; the nearest and dearest of the departed are mentally transported to a host of days gone by with which they associate that song; the vicar, perhaps, is taken back to a time before he found God, when he had heard Sid Vicious’ comical battery of ‘I Did It My Way’ in the company of the one he loved (brutally ironic considering the last thing our friend six feet under saw was a hard wooden floor while stage diving at a punk gig…); the gravediggers whistle along under their breaths, and the birds in the graveyard accompany them in song; a babe in arms gives no acknowledgement, yet all the while files away sounds and melodies in her subconscious until, eighteen years later, she will write her own songs about love, loss, and the father she never met. The song means something different to each individual, yet unites them under its one common bond.

Not wanting to rest on my laurels after seeing them in June at Donington, I caught The Wildhearts a couple of months later at a sunny Reading Festival. They were on the main stage, halfway up the bill, lodged between the hardcore metal of New York’s Helmet and Afghan Whig’s soul-centric musings. I remember us rushing up to the front of the stage in typical festival fashion, sliding and shimmying our way between people, getting into prime position just in time to witness The Wildhearts ripping Reading a second arsehole. On this occasion, I was with my long-suffering best buddy Rob, who I’d been bombarding with my enthusiasm for the band ever since I’d come across them. Canadian Devin Townsend was the guitarist filling CJ’s shoes – though Ginger had stated that Devin was a stand-in and not a permanent replacement for CJ. Devin and Ginger had originally met when The Wildhearts supported Steve Vai’s band, who Devin was singing for. During the tour, Ginger and Devin bonded with a delightful game of seeing who could go the longest without washing. Many years later, while watching the Reading set on YouTube, I was struck by how much Devin’s vocals stood out from Ginger’s, as opposed to blending in, as CJ’s had at Donington.

Danny spent nearly the whole set on a flight case in agonising pain after dislocating his knee during the blitzkrieg of opening song ‘Caffeine Bomb’. One minute we could see him, the next he had disappeared without a trace. It was a case of there he is, now he’s gone, there he is, now he’s gone, as we bounced to the beat of the drums, catching glimpses of him at the highest point of our jumps. Two stage guys helped him onto the flight case while the rest of the band played on. He heroically dragged himself to the mic and sang (or rather squealed) the, “Think I’m gonna throw” part and finished the remainder of the song standing. For the rest of the set, however, he sat. He stuck it out until the end, though, still shaking his head and bashing his feet against the flight case. What a trooper!

On a more serious note, the other reason I hold ‘Bad Time’ close to my heart is an occurrence that took place one Sunday in June ’96. I’m a little sketchy on the date, as it’s not exactly a fond memory. Something happened that opened up my life as well as my eyes, something that pushed a secret held within out into the open. I remember parts of that night as clearly as the glass of water I poured myself before sitting down to write this. The remainder of this seismic event in my life is locked away forever in a section of my brain, the key to which is lost, never be found again.

Strangely enough, the first thing that always springs to mind is music, specifically the vinyl version of Ash’s fantastic album, ‘1977’, that was getting its second spin of the evening on my stereo. I was having my usual litre of cider before heading off to Rob’s and then into town. We normally started off in The White Hart, where we had our own corner and an unlimited number of pound coins to pile into the jukebox. The Stone Roses were always our favourite choice. Rob was (apart from Dick) my only real mate, and we went out drinking together maybe five or six times a week. However, in recent times, for reasons I was not then entirely certain, depression was getting the better of me. It was bringing out the worst in life, gradually extinguishing my will to live, so much so that, on the night in question, the flame had just about cast its final shadow and taken its last breath of oxygen. My will had all but departed from its empty home, leaving me with only a blot of nothingness to hold onto. Have you ever tried to hold onto nothing? That fucker can slip between the narrowest of gaps, and I was in no fit state to plug the holes it was seeping through.

After riding the wave of fun, I crash-landed over the barrier, expecting security to march me out to the side so that I could then go through the whole exhilarating process all over again. But I realised how wrong I was when instead I found myself in a back alley staring at a brick wall. What happened for me to end up outside, as opposed to remaining in the building, I’m not sure. But I managed to get back in through the main entrance with a smile worthy of a thousand cheesy grins still plastered over my face. ‘Well, Gary,’ I thought, ‘I think that little adventure deserves to be rewarded with a trip to the bar.’

The bar was packed, but needs must, so I waited, all the while hearing the Babies ripping the roof off in the background. Over the noise of the music and constant chatter, my ears pricked up at the sound of a Geordie accent to my right. Glancing over, I saw two blokes in deep discussion. The nearest to me looked the spit of Ginger. ‘Nah, it isn’t. He looks different… It can’t be,’ I told myself. Then, just as I was pondering the prospect of my favourite musician standing right next to me, as opposed to being on a stage, the other guy called him Ginge’. ‘It fucking well is ’im!’ I thought. ‘As I live and breathe, the guy that’s responsible for giving me so much joy in my life over the last six years is standing at the bar only three feet away. 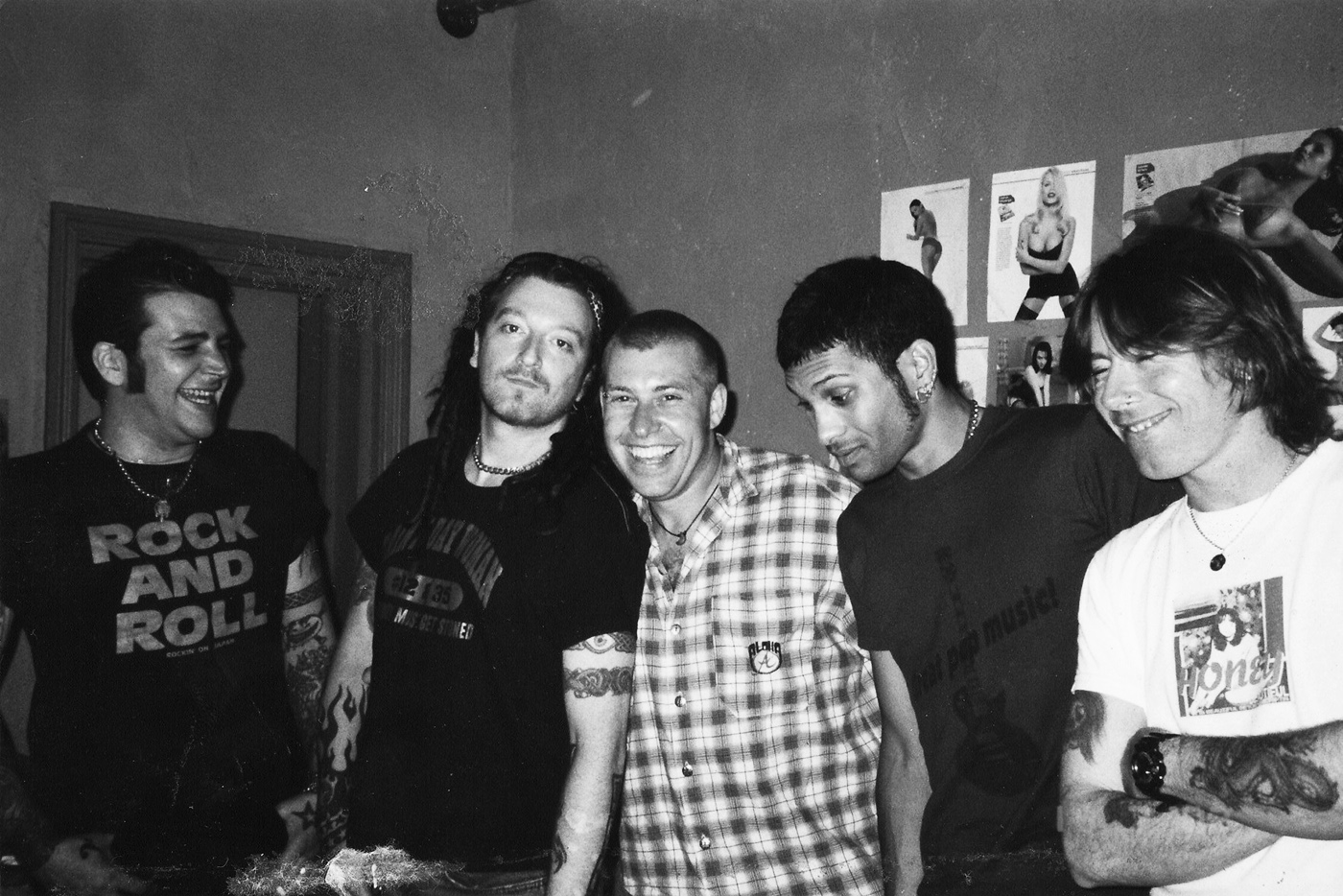 19 July 2002: Me and the boys backstage after interviewing them at the Zodiac, Oxford.I yanked the volume up to a ludicrous level and readied myself in anticipation  of the sonic assault I expected from the next song, ‘Liberty Cap’. A mercurial bass line snuck in and pummelled into the rest of the song; a melting pot of chaos ensued. The cry: “I got sickness in my head/I got spiders in my bed/I said leave me be, man. I just wanna be on my own!” led into a stoned state of dreaminess and distant harmonies. The song then exploded into one of the most audacious riffs I’d ever heard, followed by another thirty seconds of all-out carnage and… STOP! The needle slid off the grooves and waited for the vinyl to be turned over, where it would then be abused by the aural onslaught of: ‘Nothing Ever Changes But The Shoes’. This was all I never knew I wanted to hear playing right in front of me. This was like everything and nothing I’d heard rolled into one unified beast. This felt somehow dangerous and comforting all at once. This was The Wildhearts!