It was my 22nd birthday when an e-mail dropped into my inbox with the words ‘I fucking love your work!!’ and an offer to buy the portrait of Ginger I’d sent to the Wildhearts website. The message was from the man himself. I was jumping around the room, ecstatic that I’d managed to impress the guy who had provided me with the most incredible soundtrack to my teenage life and beyond. I’d just finished Art College, and had recently started to develop a style of painting combining influences from cartoon and comic art, American “low brow” painting, surrealism, and pop art – the perfect mix of artistic obsessions to use in paying tribute to my favourite pop rock troubadour! 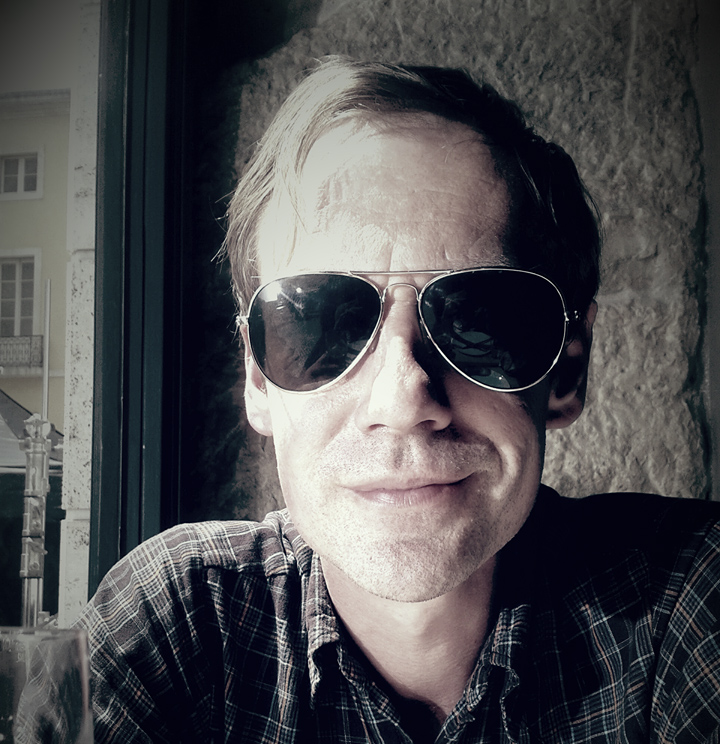 I’d been a fan of The Wildhearts from the first time I heard ‘Nothing Ever Changes (But the Shoes)’ on my local radio station’s weekly rock show. When ‘Earth Vs’ was finally released, it confirmed to me that this was The Greatest Band On Earth! My obsession with music was really hitting its stride at the age of fifteen and I was crazy about so many bands, but The Wildhearts still managed to stand head and shoulders above all the rest. The sheer life-affirming quality of the tunes, the eclectic sound that always kept you guessing, the brilliant slice-of-life poetic lyrics (with great swearing!), and the whole scuzzy, cartoony, punky, rock ’n’ roll image – how could they not be your favourite band?! While most of the population wasted their eardrums on Oasis and Blur, all of the good boys and girls in the world knew The Wildhearts were the real deal.

It wasn’t long before I was wearing my smileybones t-shirt every day, making imaginary Wildhearts single covers in art class, and adding to the big magazine cut-out montage on my bedroom wall. This was pretty easy considering how much the band were featured in Kerrang! magazine especially. Their news story about Ginger cutting off his trademark dreads with the headline ‘Ginger In Shorn Locks Shocker’ still cracks me up. Despite all the tabloidy fun and frolics and living the rock ’n’ roll lifestyle to the max, the band had a real commitment to quality, especially with their attitude towards singles, reviving the concept of great B-sides. They were constantly upping the ante and were so volatile it was inevitable that they would eventually self-destruct. The recent reunions have been fun, but for me The Wildhearts died in that huge crunch of noise at the end of the ‘Endless Nameless’ album.

I also loved the way The Wildhearts led me to discover so many other amazing bands, whether through exploring the influences listed in ‘29x the Pain’ or Ginger mentioning something he was currently into in an interview. Interviews with Ginger were always great too. Though he often wildly contradicts himself, his fascination with life, the universe, and everything is always expressed intelligently – and hey, life is often contradictory! It was refreshing to hear a rock frontman making a strong stand against sexism and violence against women, expressing his hate for ‘lad culture’, and talking honestly about drugs. It was also cool that he was a Love & Rockets comics fan, which I was also discovering at the time.

I saw them live for the first time in Hanley supporting The Almighty. The Wildhearts effortlessly stole the show, delivering a killer support set and looking like the coolest, trashy rock ’n’ roll superheroes to ever grace the stage. The first time I saw them headlining was in 1994 at the Buckley Tivoli (I was living in Wrexham, North Wales at the time) – the ‘over 18s only’ Buckley Tivoli that is! I was 16 and remember stealing some of my Mum’s mascara to boost my feeble teenage stubble with a little extra shading to help ensure my entry to the gig! I saw the band many, many more times after this – each time a different, special, and unpredictable event. I don’t think I’ve ever known a band whose performance quality depended so much on the mood of their frontman. It always seemed to take a week to recover from a Wildhearts show!

After sending that first portrait, Ginger became a kind of patron to my art. I just kept making more, propelled by Ginger’s huge enthusiasm and encouragement. The portraits were used to illustrate the regular ‘Ginger Says’ pieces on the website, which were always exciting enough for a fan like myself – full of Ginger’s wit and wisdom. In an article for Kerrang! where he was asked to talk about his five favourite possessions, Number One were the paintings of mine that he owned – more prized even than his life-size cut out of Keith Richards and his book of Laetitia Casta photos! High praise indeed. This was all around the time that Ginger was unleashing his new solo project SilverGinger 5. I absolutely adore the ‘Black Leather Mojo’ album – it’s my dream music, and contains some of my all-time favourite songs. Ginger asked me to create a commemorative poster for the band’s debut performance at London’s legendary Scala venue. This piece was a real labour of love. I really tried to visually capture the dizzying SG5 sound. Sadly, things didn’t work out in time with the printers and only a very limited run of fifty prints were sold at the band’s second show at The Astoria. The Scala gig was also the first time I got to meet Ginger. He greeted me with a big hug and was happy to finally put a face to the name after all the e-mailing. Like pretty much every other time I’ve met him, I became a tongue-tied, flustered fan-boy who just wanted to thank him for his amazing music – oh dear. The Scala show was also where I first properly met Mark Hodgkinson, who was friends with Danny and had done the painting inside the ‘Suckerpunch’ single and the Yo-Yo’s artwork. Obviously, we had loads in common and became great friends, collaborating on posters and websites, and going to lots of Ginger-related gigs. The next time I met Ginger was outside a Cheap Trick show in London. He was just finishing off a large bottle of something strong when he spotted me. He shouted down the phone to his then girlfriend Angie, “Oh my God! My favourite artist in the world is here!” I felt pretty damn cool after that! – and managed to catch one of Rick Nielson’s plectrums (hey, he only throws out about two hundred per show!).

In 2001, Ginger announced his plan to release twelve singles in twelve months, and asked me to be involved in the artwork for them. I couldn’t believe I was already doing artwork for my favourite songwriter. Wasn’t this supposed to be something you hoped to get to do somewhere down the line in your illustration career?! Unfortunately, for various reasons the project didn’t get completed – I did artwork for four of the five singles released. Sanctuary Records compiled all the singles as a double album called ‘A Break In The Weather’. After one of his fantastic acoustic gigs, he asked me if I’d like to do the artwork for this. I said yes, of course – and was really pleased that I would have pretty much full control of all the art and design this time. I don’t think Ginger is that keen on having images of himself on his album covers, but I think he has such a distinctive look that goes hand in hand with his music, and it just seemed right to have his mug on the front of this collection of personal songs. 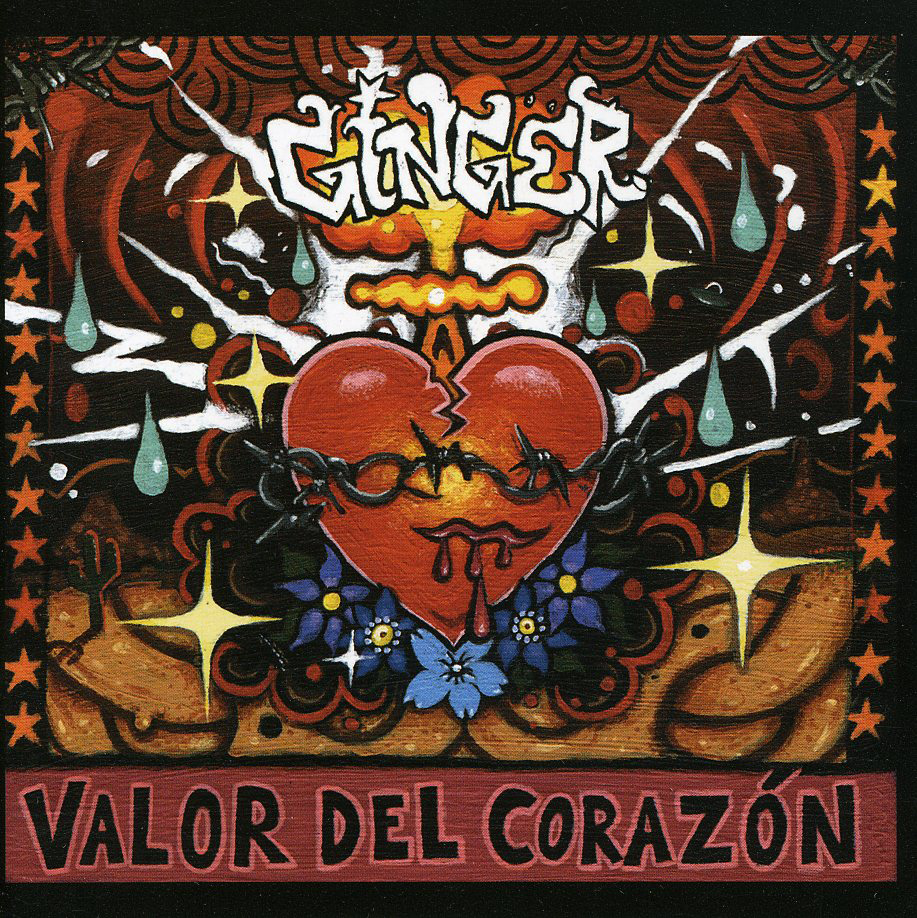 The peak of my time working with Ginger came about twelve months later when he wrote to me telling me about the solo album he had recorded called ‘Valor Del Corazón’. He asked if I could do some artwork ASAP. This really was a dream come true – the cover art for a double, emotional sonic rollercoaster with Ginger’s songwriting on top form. The ‘Valor’ painting is inspired by the traditional ‘votive’ prayer paintings of Mexico – a strong influence on my work, and perfect for the theme of hope after dark times so passionately dealt with on the album.

All the work I’ve done for Ginger and The Wildhearts basically comes from the excitement and energy that the music inspires. I’ve been really lucky to work with Ginger (not to mention all the other great folks in planet Wildheart – big tip of the hat to Mr. Darren Stockford), and being able to develop as an artist through such fun projects has been a really valuable time for me for which I’ll always be thankful. It’s all been one long teenage dream come true – and teenage dreams are hard to beat!

More of Dave Heulun’s work can be found at heulun.wordpress.com