In a video Ginger told us of the challenge to send in the shittest gift you could think of. A rubbish item from your house or a crap purchase from a shop that specialises in selling garbage and bollocks. The prize: Ginger would write and record a song on the subject of your choice. This was without a doubt the best prize of the whole G.A.S.S. campaign.

You could either send it to the address provided or if you were going to Ginger’s Birthday Bash at the Kentish Town Forum drop it in a rubbish bin at the merchandise stall. Ginger ended by wishing us a happy Christmas and asking us to wrap our shit present in Christmas paper. I pondered for a few days… and pondered… and… I was stumped on this one. Then… no, I couldn’t. But I could, and did. Not wanting to gift a second-rate sloppy, I firmed up my stool by eating plenty of the necessary food types for 24 hours beforehand. I’d never shat in a plastic container before: perching over the loo in case I missed the bullseye I produced a perfect brown-baby-boy. A sturdy looking fella he was too. Realising the absurdity of the act I’d just carried out, I burst out laughing and almost dropped the little fella on the bathroom floor. Relocating to the bedroom/preparation room, I begun to put my plan into action. A makeover was definitely on the cards. Making sure Shit sat still and behaved, I superglued him to the tub. Whad’Ya Know? Shit and Super Glue are natural bedfellows. To start, I pushed some googly eyes, and threw some festive glitter onto his sticky frame. I then sprayed some lacquer so Shit would – hopefully – keep his shape. I also added Caster Sugar to create a snowy effect. Idyllic! I then opened the window and left the little fella on the windowsill. Before heading downstairs and away from the stench, I sprayed plenty of air freshener and firmly closed the bedroom door.

I took the phrase ‘doing daft shit’ and Ginger’s request to send a ‘shit Christmas present’ literally. But I couldn’t just, send Shit. That’d be, inglorious. As well as the obligatory Xmas card I devised this humorous letter to go along with it.

I never did send a No. 2 into Radio 1 in 2003 when you requested us fans to do so – however this seemed like the perfect opportunity to redeem myself. I took you literally when saying ‘send the shittest Christmas present’. In fact it’s such a ‘shit’ present you’ll want to throw it straight in the bin.

I had to have a few dunny-runs at producing the perfect specimen but I think I may have kacked it. Saved from going down the u-bend, but separated from his brothers and sisters at birth, I got quite attached to the little fella. So with a heavy heart I hand Shit over to you.

WARNING! THIS IS 100% THE REAL DEAL AND NOT A FAKE
Keep sealed for freshness Not to be taken orally

I must’ve used a roll of tape to seal the lid then wrapped the tub in Darkness (a fav band of Ginger’s) Christmas paper. As a vague clue to the dangers within I shrouded it a second time with skull and crossbones wrapping paper. I made certain Shit was in a non see through bag, and there he stayed for the next eight days until December 17, the day of Ginger’s Birthday Bash.

Sitting on a train with my own (not like it would be anyone else’s) excrement sat by my side was a weird experience. Moreover, having to move Shit out of the way for someone wanting to sit down, was mildly amusing. Pre-gig meet-up haunt The Assembly House was full of Ginger nuts. A few had presents to leave at the merch stall; we discussed the differing ideas we had leading up to our final decision of a gift. Embarrassed at my choice I kept shtum. Months later when telling people of my Shit-present-antics I felt a combined sense of embarrassment, hilarity and pride. All the G.A.S.S. competitions I’d entered had given me an excuse to do and see things I wouldn’t normally see and do. This one especially – on the doing side, anyway. Once in the venue it was just a case of separating myself from Shit by handing him over to the person at the merch stand. He was then placed in the rubbish bin, as mentioned by Ginger in the comp video.

I was shitting it that Ginger&Co wouldn’t see the funny side of my endeavour. After absorbing the January edition of G.A.S.S. I was even more worried. In the podcast, Ginger explained: “It was lovely to meet the G.A.S.S. team for Christmas dinner; what wasn’t so lovely was opening up the gifts considered to be the worst Christmas gifts that you could possibly present. The gifts ranged from the bizarre to the borderline criminally obscene.” Ginger then went on to explain that they unwrapped them in the middle of dinner, and Ruth (one of the G.A.S.S team) nearly pucked when mine was unwrapped. He then went on to say, “You honestly thought that your Shit was going to win this competition?” Yes.

In the news section it explained that the comp was won by Richard Milne, who sent in a signed picture of a rubbish character from a Star wars spin-off. Underneath the photo of Ginger holding the picture it instructed us to ‘click the image to see a gallery of more of the entries.’

Amongst the entries; including an inspired Jim’ll Fix It soap on a rope, was a photo of Ginger and Chris Hodgson opening my present: Chris was grimacing and leaning back on his chair. You could just see brown through the container. It appeared Shit hadn’t travelled too well. Underneath, the photo it read:

In February’s podcast the faithful evening was discussed, once again, by Ginger and Chris:

Ginger, “We won’t go into any detail about what didn’t win, but we will say that some of it was quite literally, shit.”

Chris, “Some of it required a quick hand wash before we could move onto pudding.”

I found this all rather amusing; who wouldn’t? But as I’ve said before, I was concerned I’d taken things too far. I decided to email Andy Burrell from the G.A.S.S. team to explain my worries:

Hi Andy, I hope this e-mail (the weirdest I’ve ever wrote) sees you well.

I just thought I would send a little message to apologise if my entry in the worst Xmas present competition caused any upset on the day it was opened in the restaurant. You know the one – the ‘shit’ present.

Not that I’ve had any indication that it may have, I’ve just felt a little uneasy since I sent it. It looked pretty nifty when I wrapped it (as nifty as a turd can look), all glittered up with googly eyes.

Please send my apologies to Ruth, Ginger etc. if I crossed a line. I thought it was a cool idea yet a little off centre.

All the best,
Gaz

Hi Gary, thanks for the message! Perfect timing as well, just as I was getting a coffee and a cookie I was suddenly reminded of “that” present! It’s all good – we figured that someone would think of the literal “shit present” To be honest, we didn’t look too closely at how well it had travelled – if you say it had glitter and googly eyes, I’ll take your word for it!
We were just happy it was well wrapped!

All the best mate! 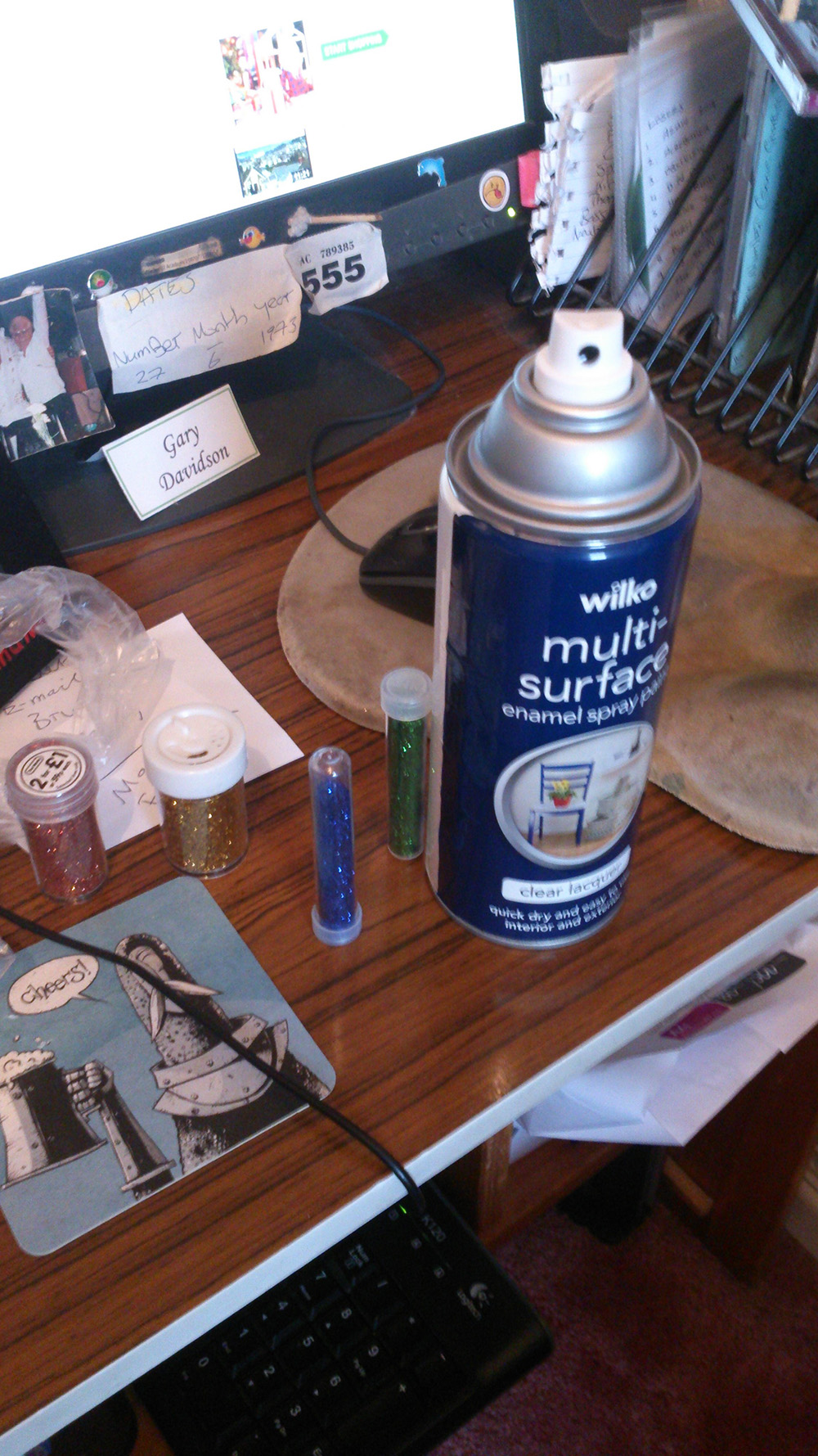 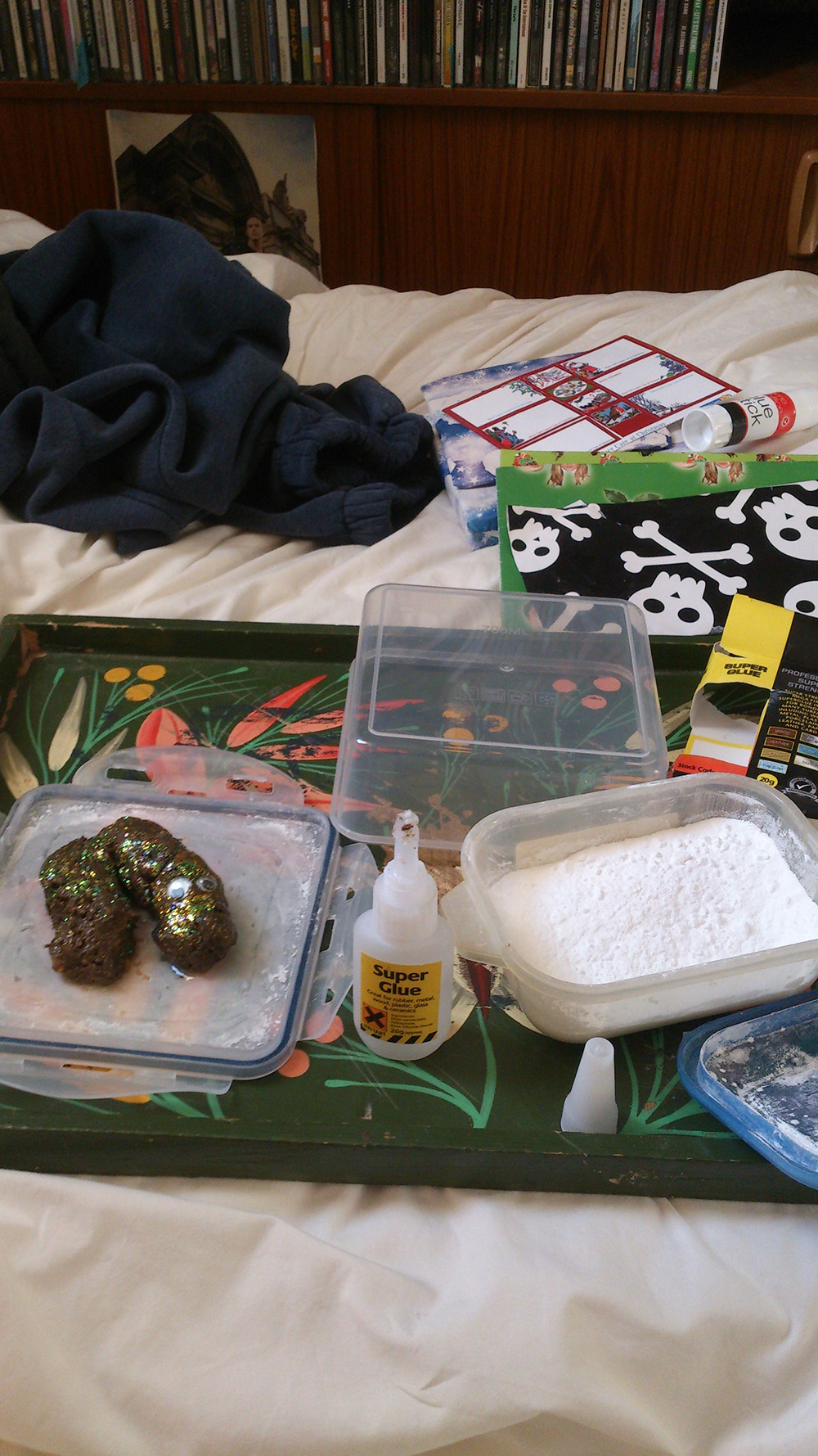 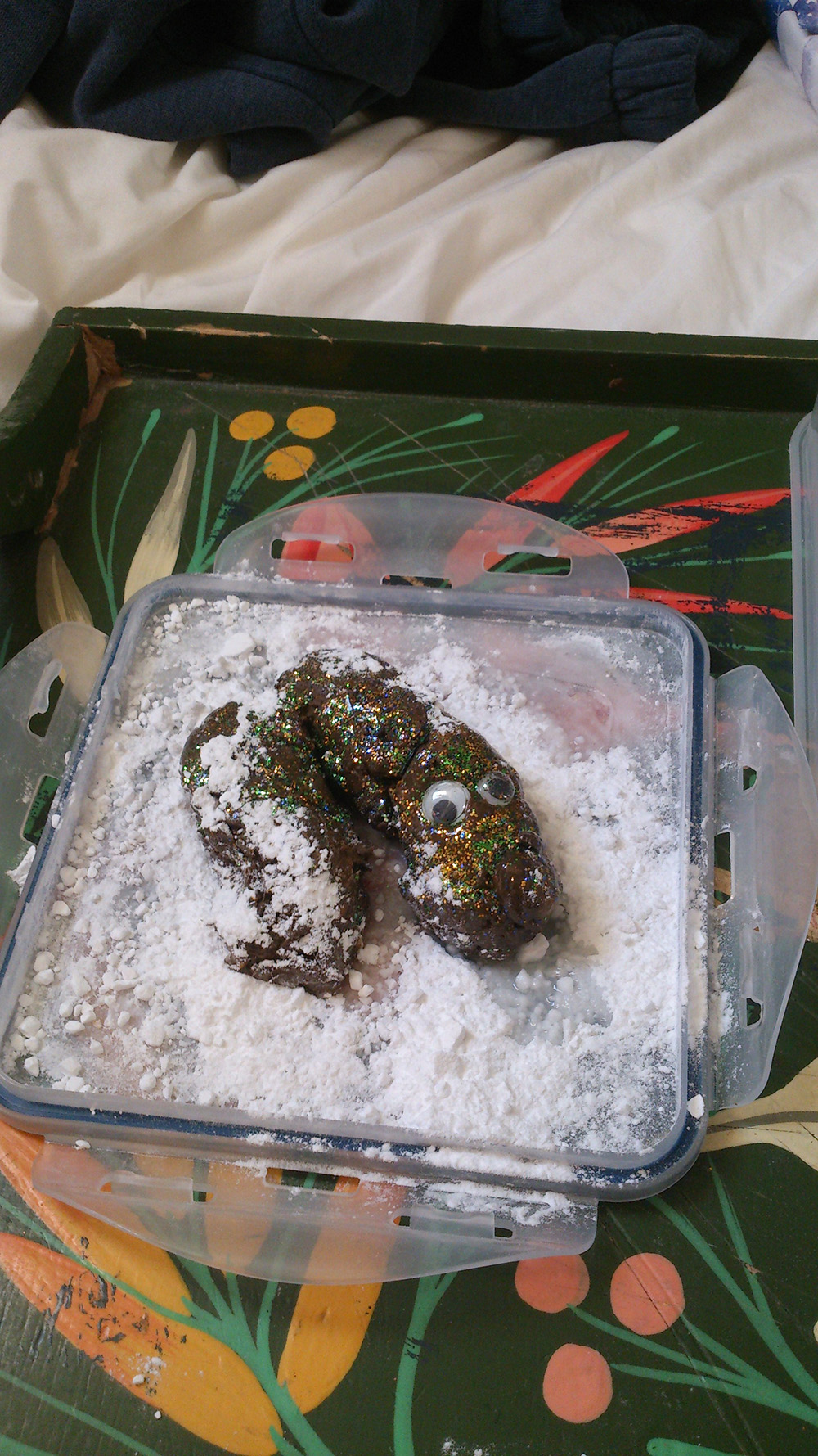 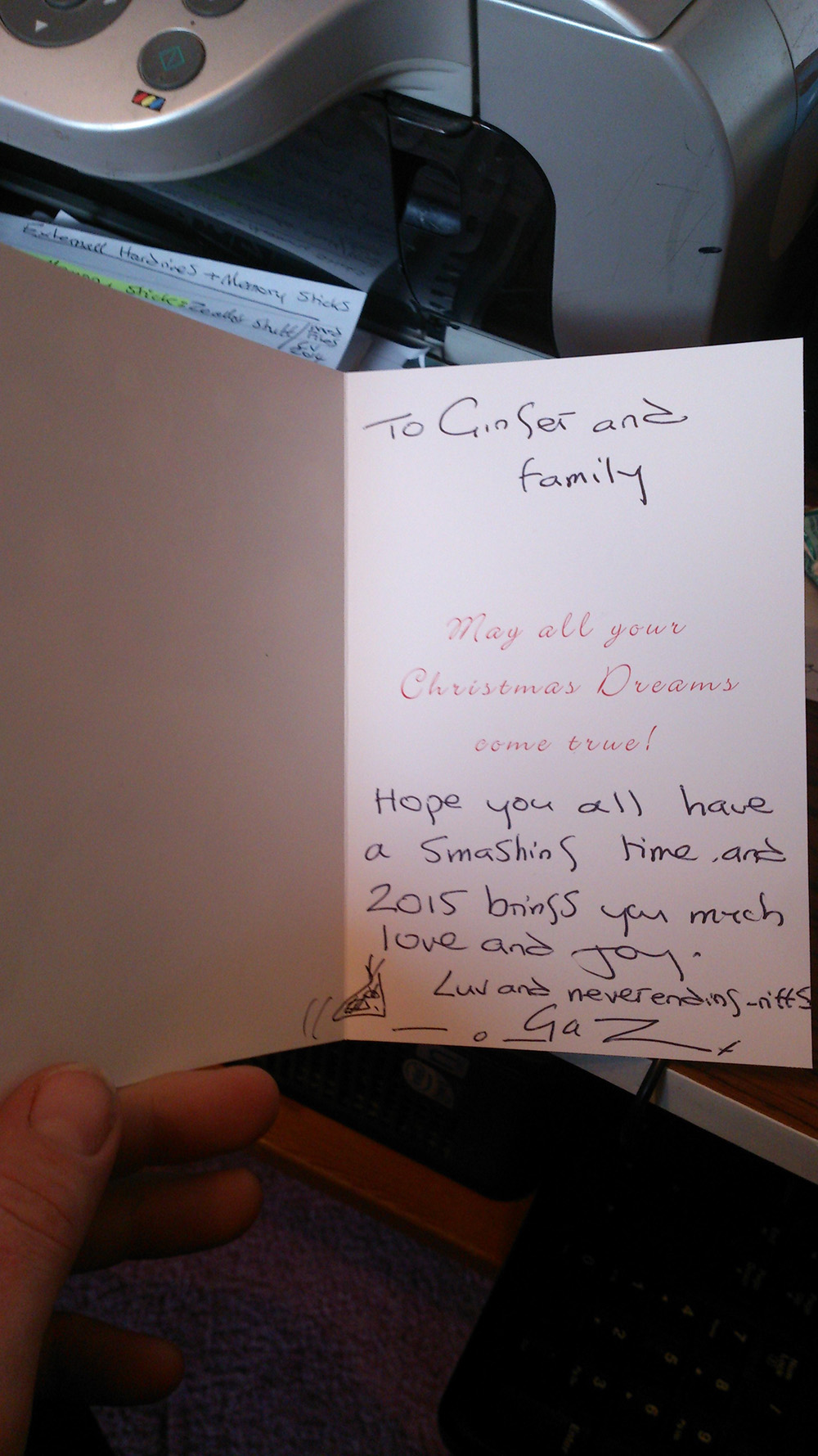 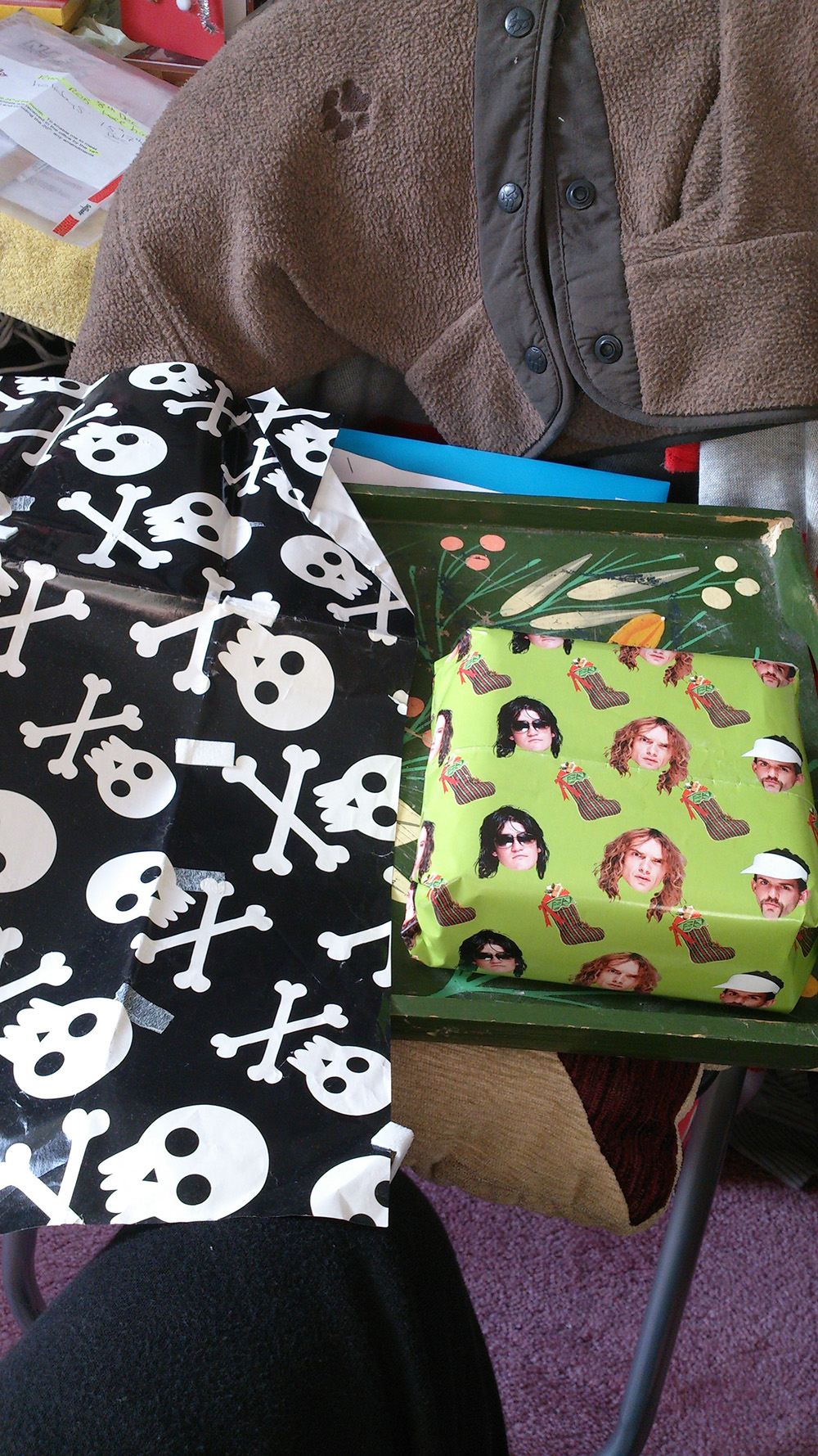 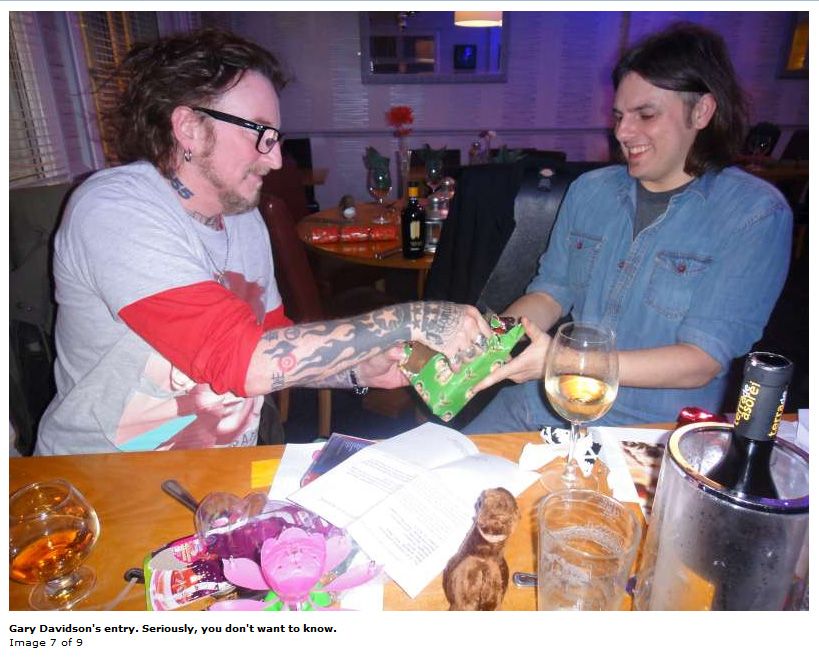