In a video Ginger explained you had to print out a stencil of the G.A.S.S. logo, then carefully cut it out. The idea was to stencil G.A.S.S. in the most humorous or unlikeliest place you could imagine. Ginger emphasised that you didn’t need to be using spray paint on any walls, as of course, it was highly illegal. Squirty cream or ketchup in a spray bottle were given as alternative options; or of course you could use spray paint – just make sure you wore a disguise in the process. And the prize? The actual wall chart from the recording of the first Hey! Hello! album. As it was shown on-screen I imagined it on my wall. OK challenge accepted…

…Over the next few days many ideas come to mind; then I remembered back in the day someone stuck an Anthem sticker on a cow for a Wildhearts competition similar to this one. I didn’t feel too comfortable defacing any outside walls etc. so the cow concept would be ideal. If I used water-based paint it would come off eventually. I knew of a farm not ten minutes from Bicester which had a field far from the road with plenty of mooers for the taking. But how did one go about defacing a cow? I Googled ‘getting close to a cow’ to see if anyone had any tips on becoming one with our grass chomping buddies. To this I was met with:

Runner escapes death after being trampled by herd of cattle during race.

The next day I had a disastrous recce mission. I couldn’t get near the herd at the top end of the field without them becoming agitated and running away. I guess I should have just been thankful I wasn’t ‘trampled to death’. Time was running out to get my entry in, so the next day I armed myself with the necessary equipment for my cow-branding escapade, jumped on my two wheeled warrior (push-bike) and headed towards my field of dreams.

I’m not sure what had changed from the day before but this time the cows were chilled to the max. It was as if they saw me and thought, ‘fuck it, here’s that bellend again! Let’s play ball and let him do what he’s gotta do’. I picked a cow that was lying down and proceeded to apply the G.A.S.S. logo as close to her butt as possible – it just seemed the appropriate thing to do. She didn’t so much as moo in my direction. 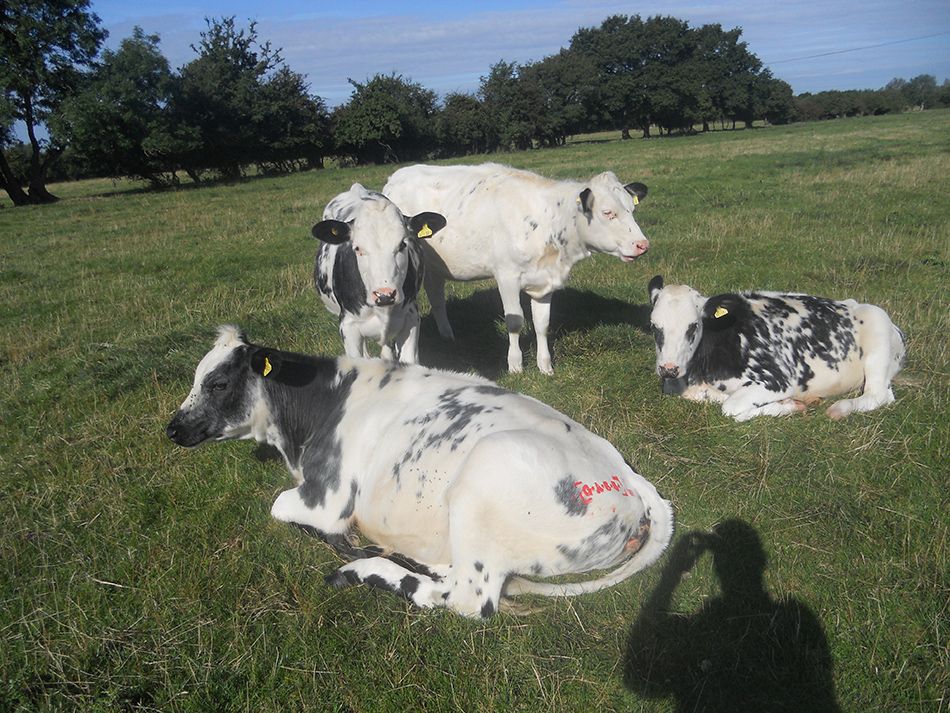 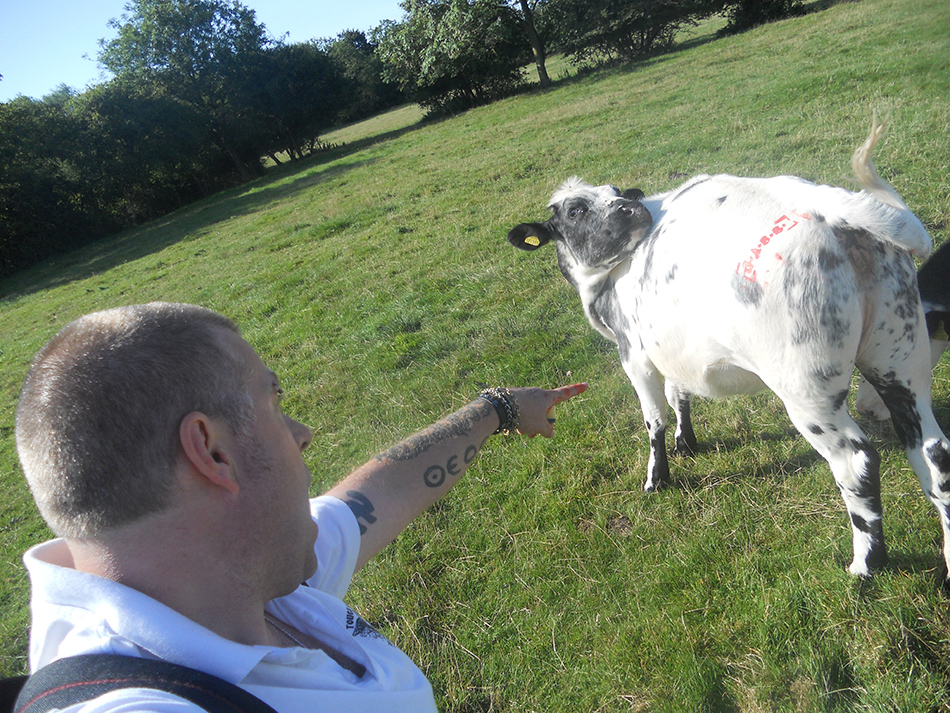 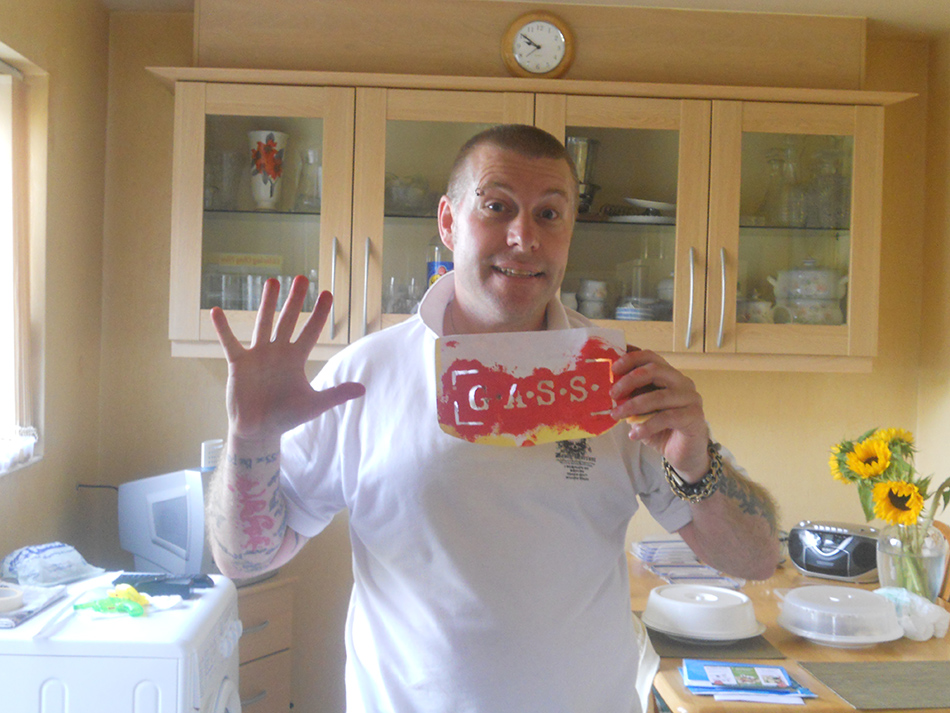 Not sure if I would win with my cow escapades I decided to double my chances by sending in two entries. After a couple of days of pondering inspiration hit while doing the gardening: I give you, Bob the G.A.S.S. Cat. 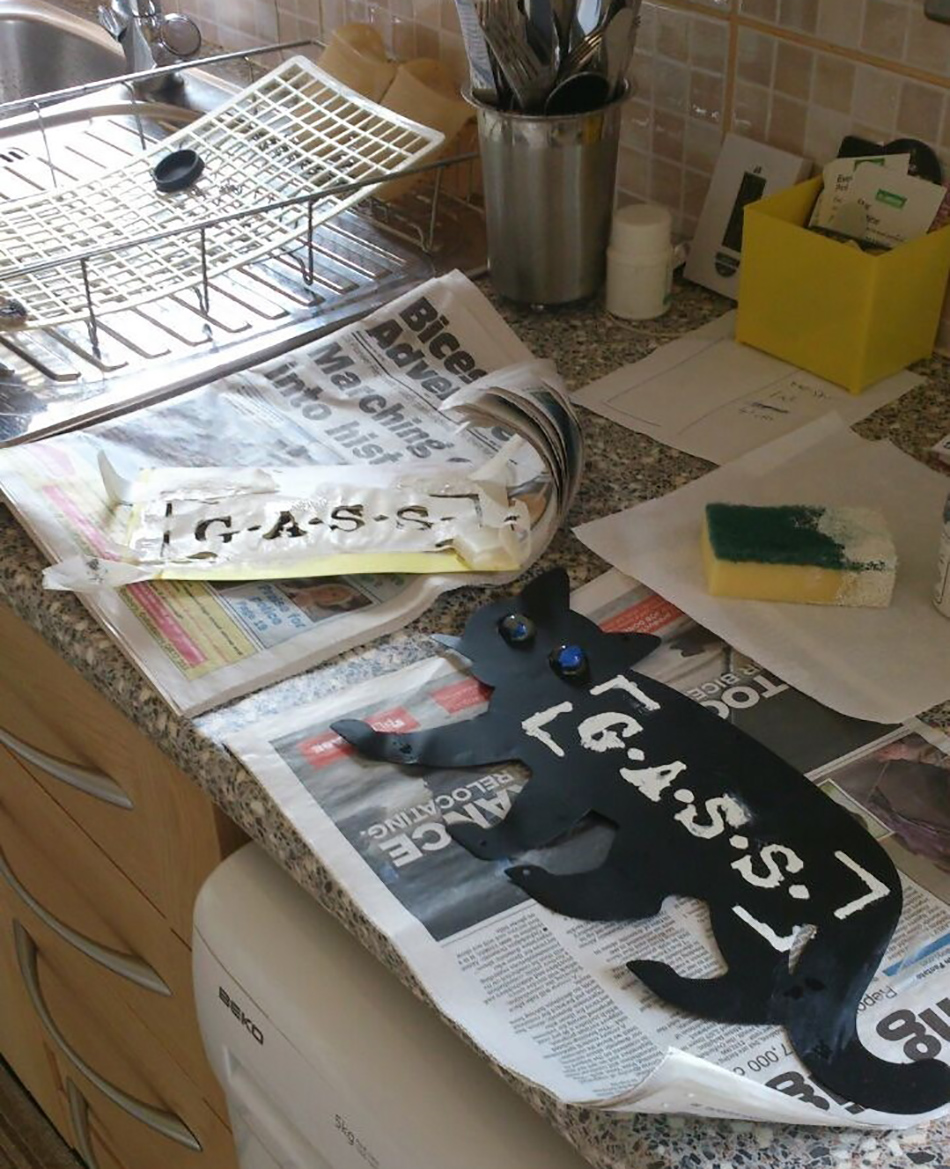 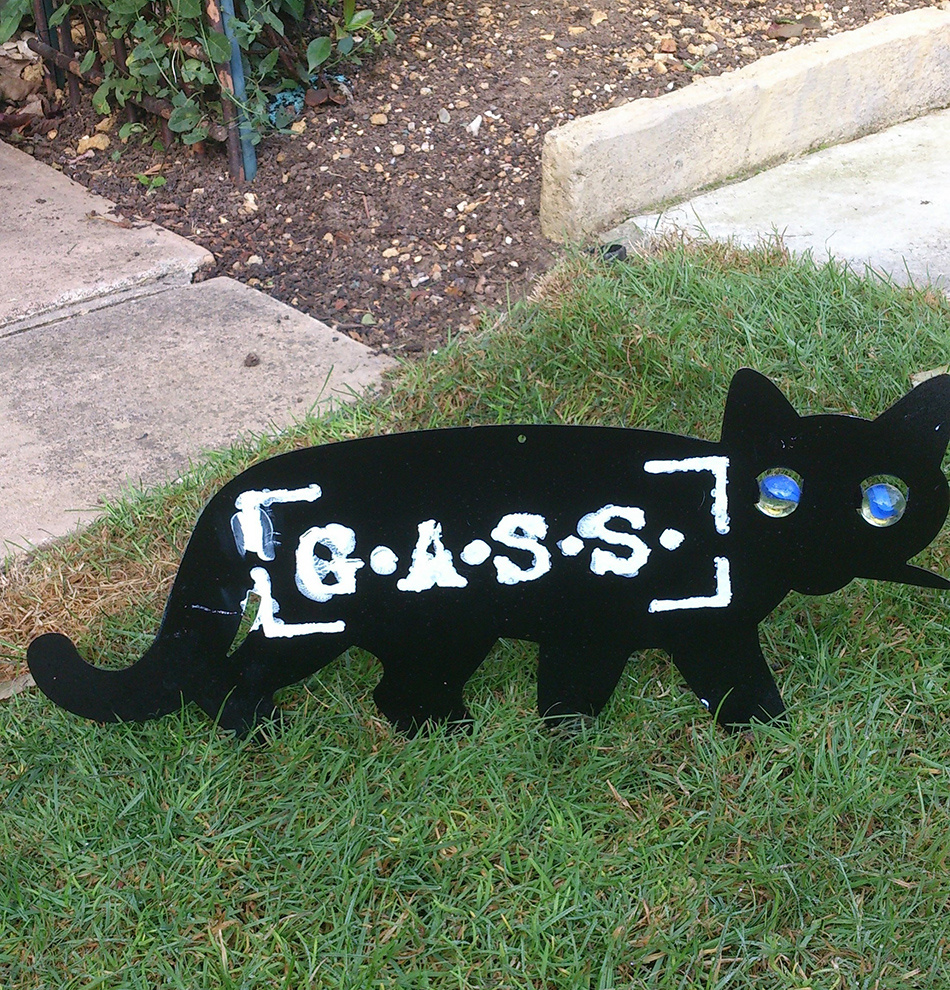 But what to do with Bob? Standing in the garden fruitlessly attempting to scare cats away didn’t cut the mustard. He had to be somewhere on view to the general public: I honestly can’t remember the process my mind went through to reach the conclusion that hanging him off the 74 foot Carfax Tower in Oxford was a good idea. Before this death-defying leap into the unknown Bob put in a few hours of hardcore practice. A bedroom window seemed the ideal training ground for a wannabe super cat. Having previous experience in hanging cats from bedroom windows, my mum volunteered. With rolling pin and an endless reel of string in hand, Bob took the plunge. 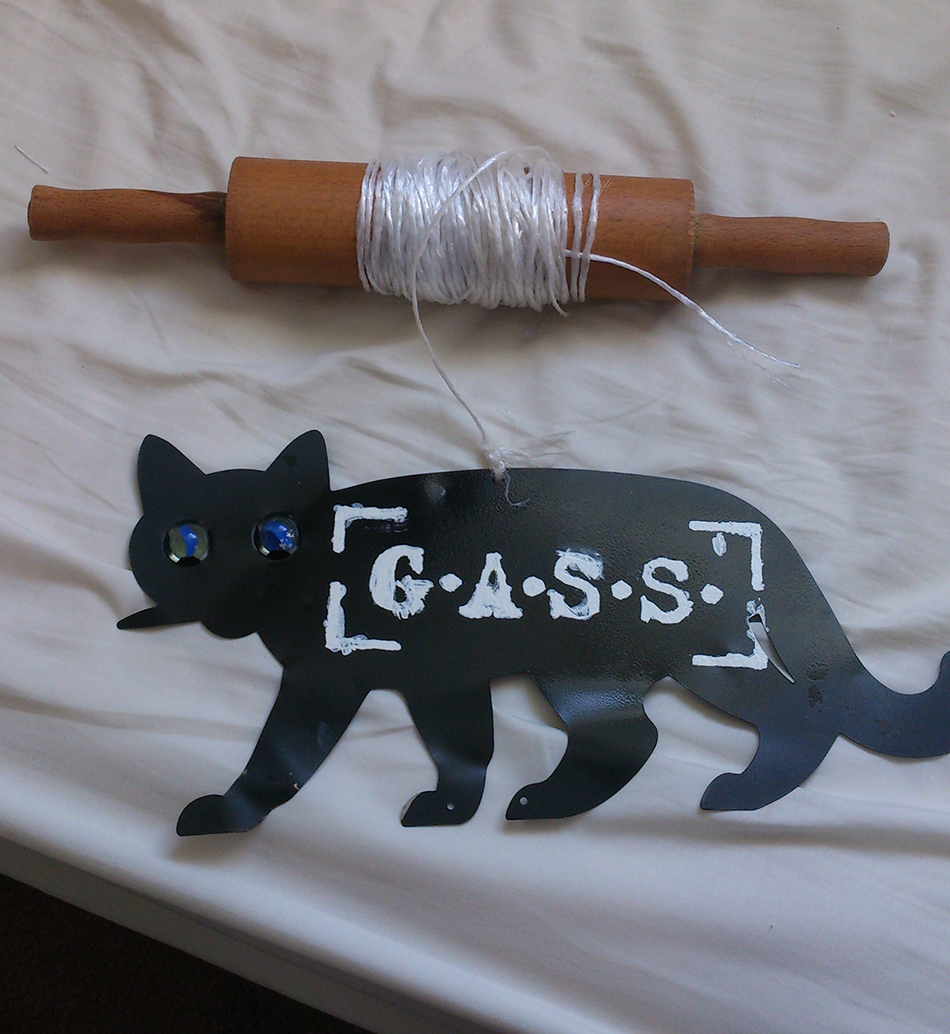 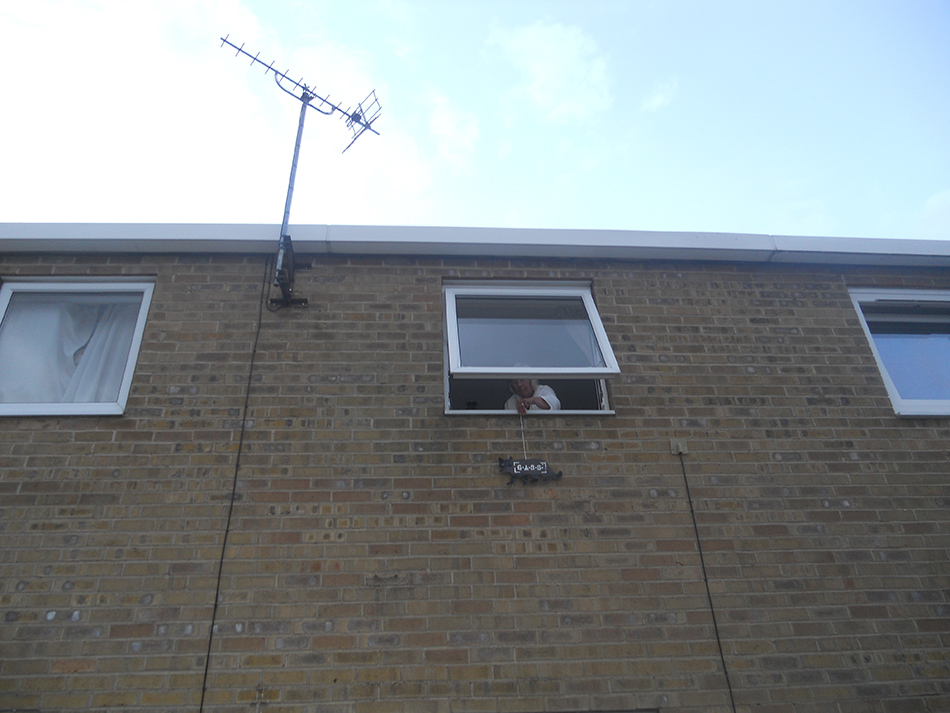 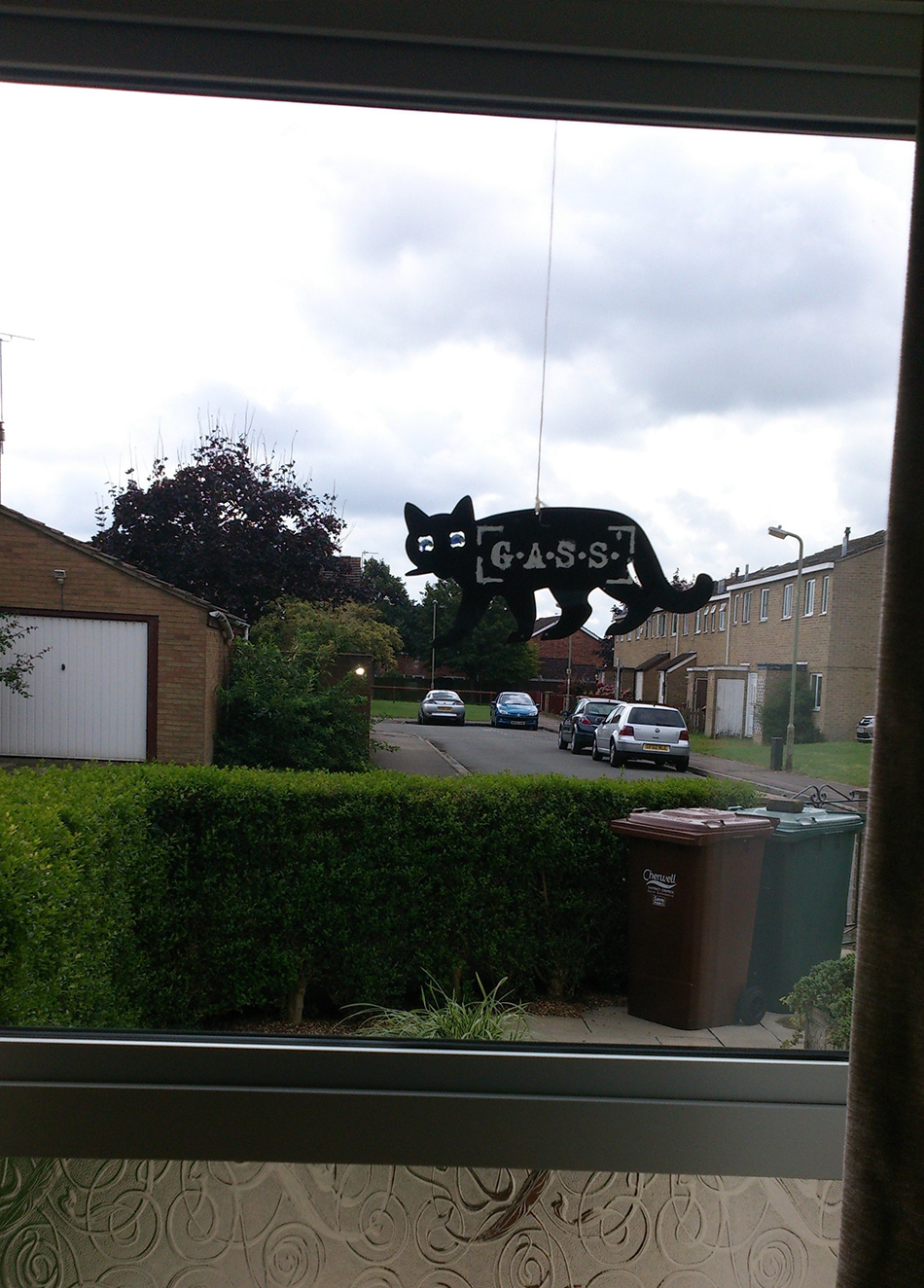 The big day had finally arrived. Bob and I met with dear friend Kerry (cameraman) Bowler in Oxford to put our plan into action. As Kerry waited at the bottom of the Tower I paid my £3 (Bob sneaked in inside my rucksack) and we made our way up 99 steps to the outside observation deck. Firstly making sure Kerry was all set, I cautiously began to lower Bob down the side of Carfax. As I lowered him further and further I could see Kerry looking up, standing amongst the hustle and bustle of the tiny people on the ground. As Bob arrived at the clock about half way down the tower, I stopped lowering and left him there for a minute or two. 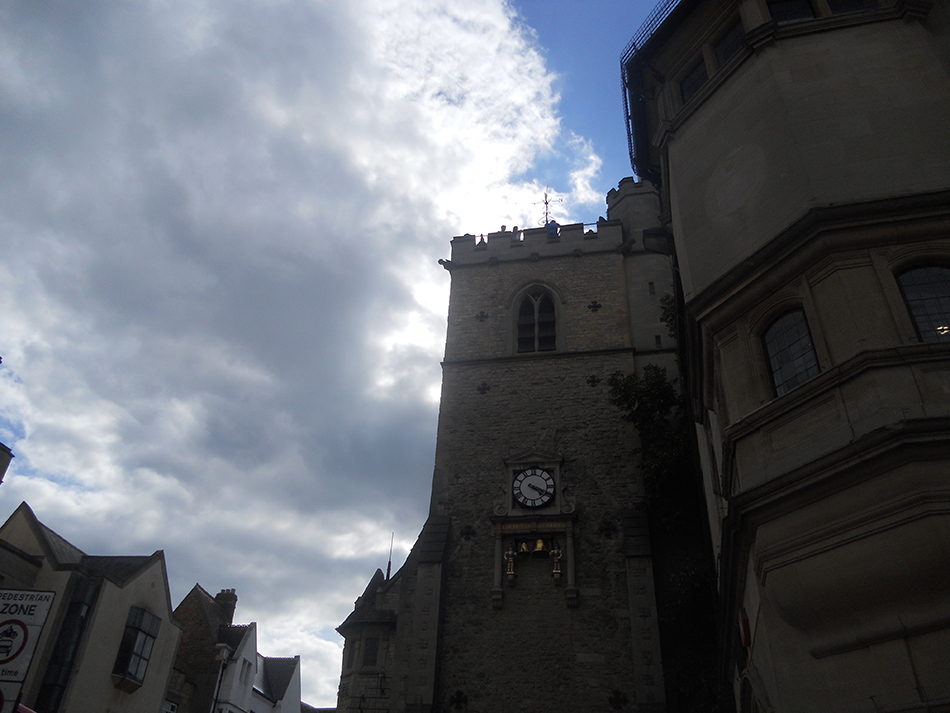 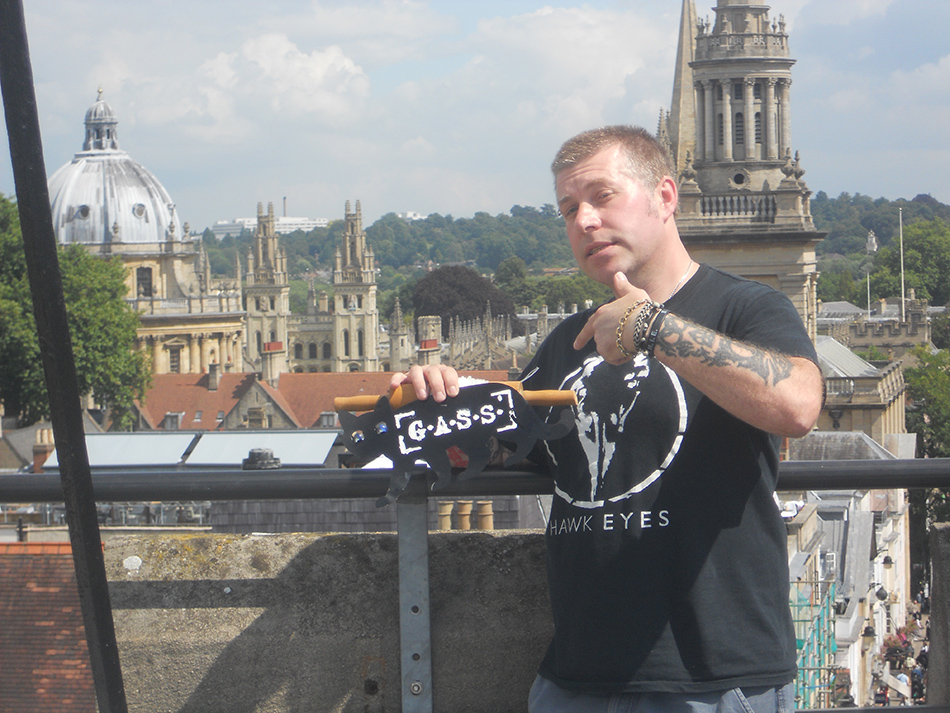 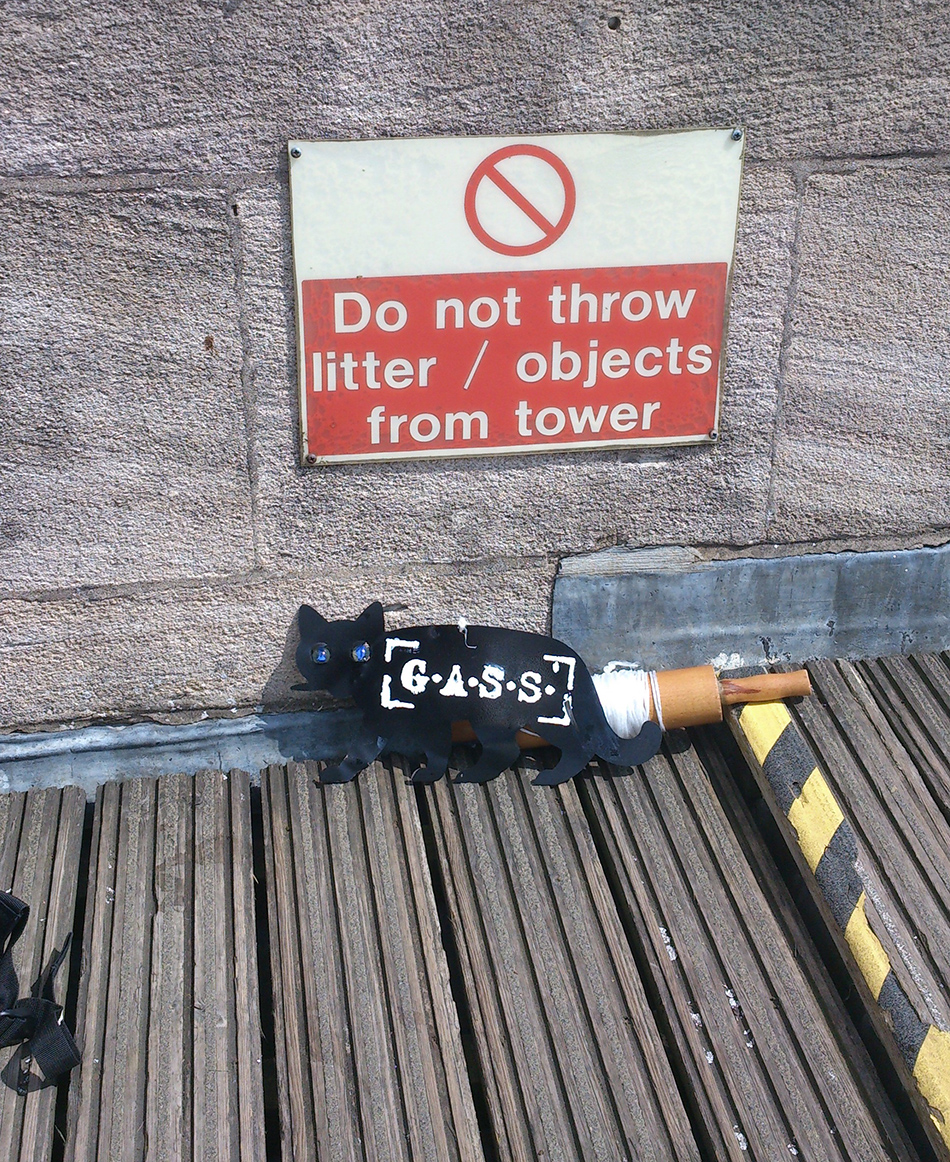 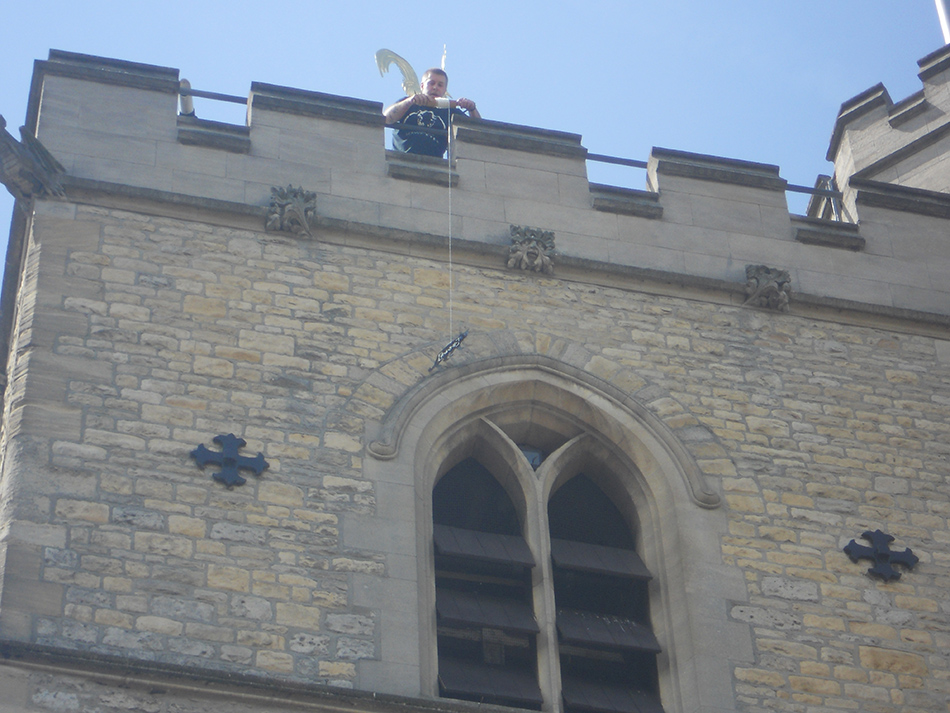 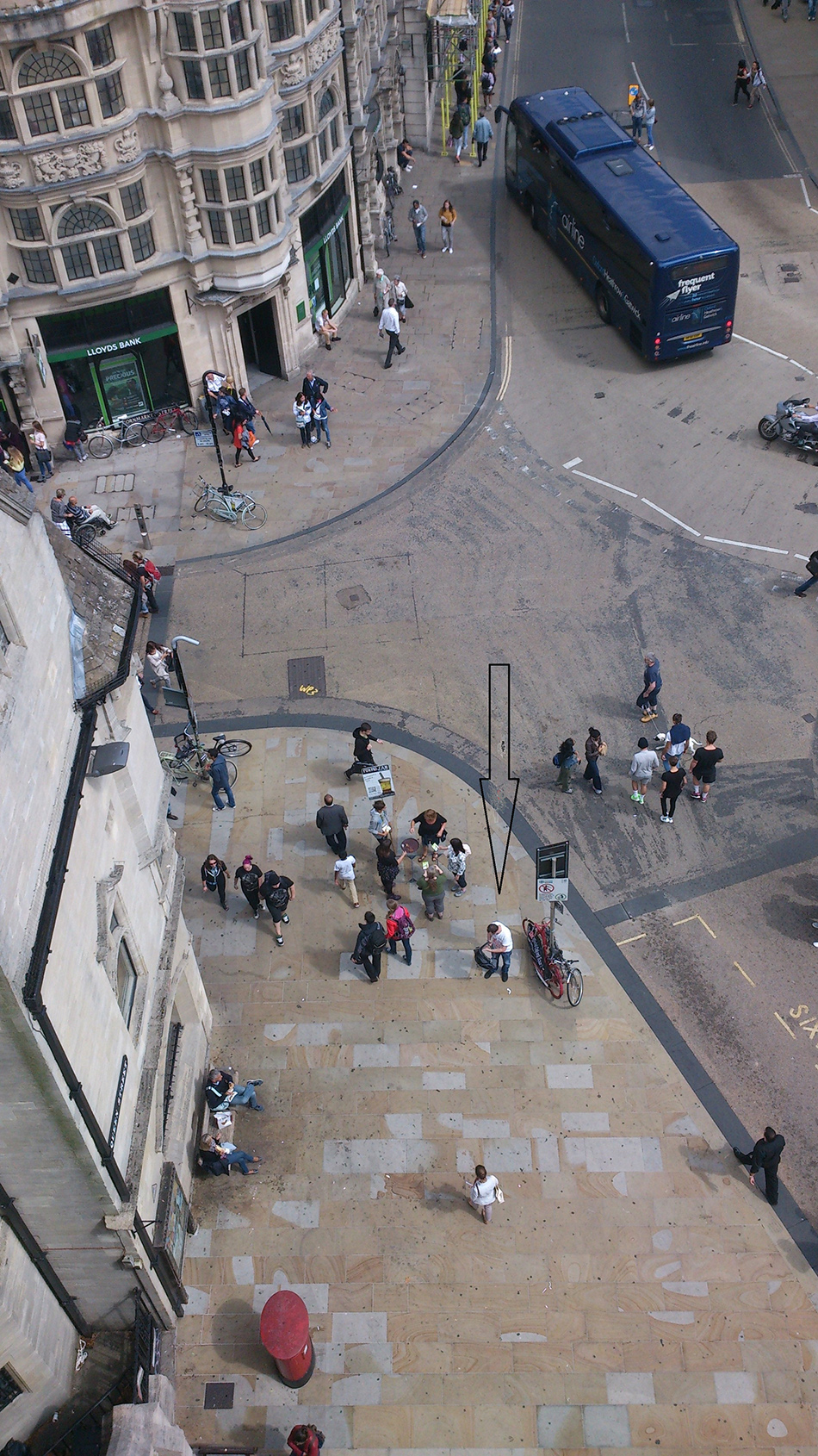 Up to this point I only had a rolling pin for company; that was until a group of three foreign tourists appeared through the open doorway and onto the viewing platform. They didn’t ask for an explanation as to why I had a rolling pin in hand, with string attached, hanging over the side of the tower; so I didn’t tell them. However I felt the need to say something, so mentioned that my mum needed the rolling pin back by Monday as she had to make an apple pie. They stared at me discombobulated. I can only assume they didn’t speak English, more than lightly though they were worried for their own safety, being so high up standing not a few feet away from someone, who was clearly not right in the head.

The time had come to reel Bob back to safety. Though a little windswept, he looked mighty pleased with himself. A scaredy-cat, he was not. We then both headed down the stairs away from the scene of the crime. After finally reaching the bottom of the tower, the chap collecting the entrance money, called out, “People have reported that you’ve been throwing things off the top of the tower!” In a millisecond my mind flipped from telling him about Bob or saying I’d incidentally dropped something from the top. I figured that showing him Bob and telling him what I was actually doing could get me a one way ticket to a psychiatric ward. But needs must: I took Bob out of the bag and explained away. I got much the same reaction as I received from the three people on the viewing platform. What, they hadn’t heard of Ginger Wildheart, G.A.S.S. or Bob the G.A.S.S. Cat? Some people…

Of course it isn’t the winning but the taking part that counts: I BLOODY WON!!! The cow branding, bagged me the prize. The studio wallchart didn’t come in a frame so I made one myself and painted it in a cow stylee with the same red paint I used to brand the G.A.S.S. logo on the cow. 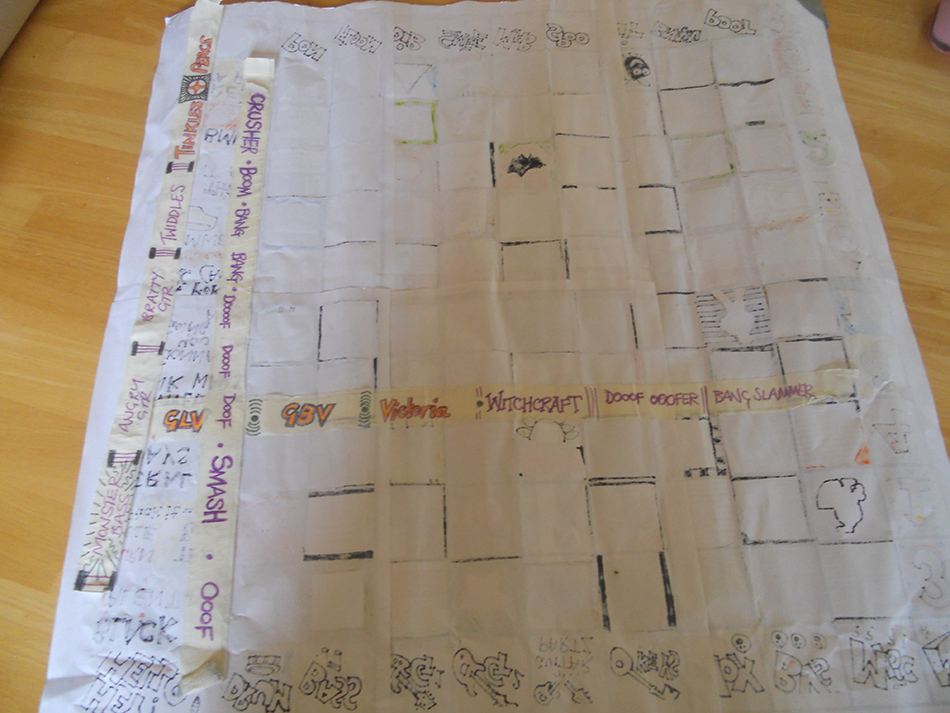 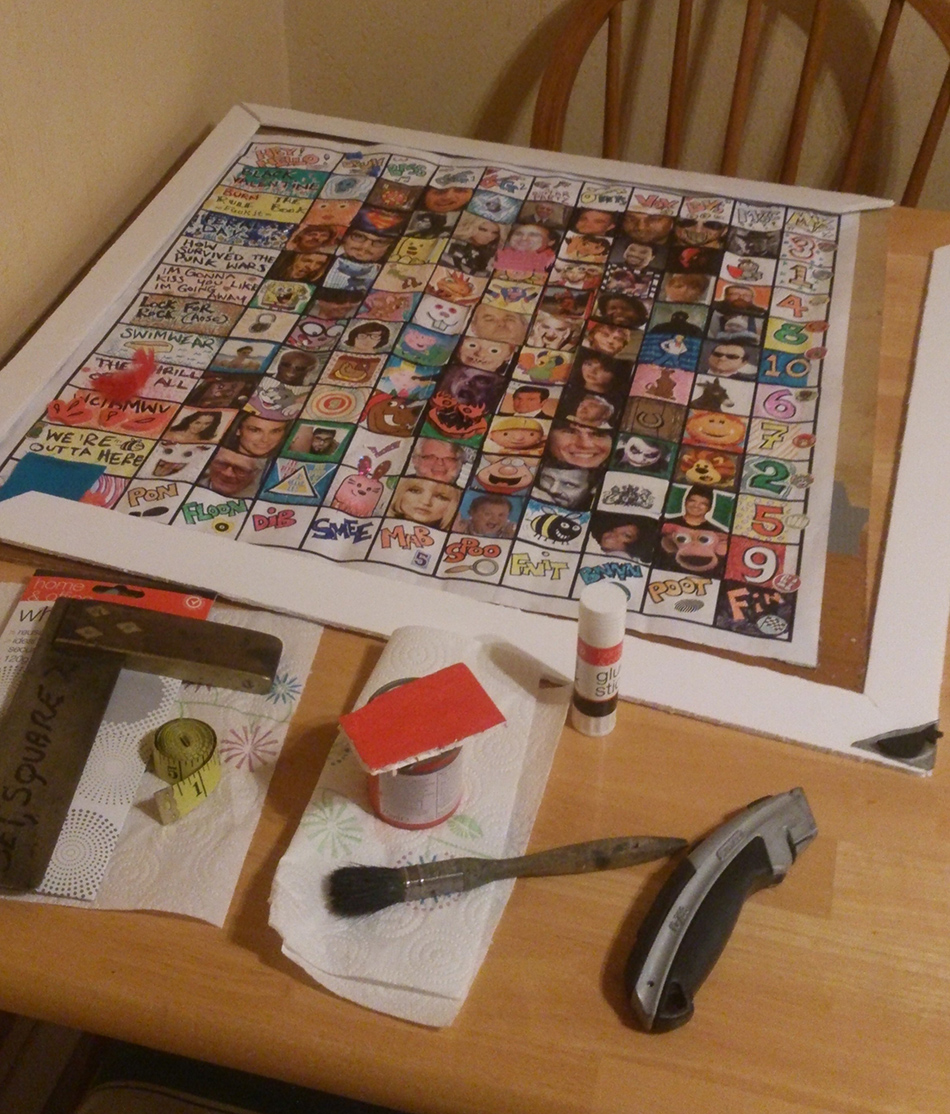 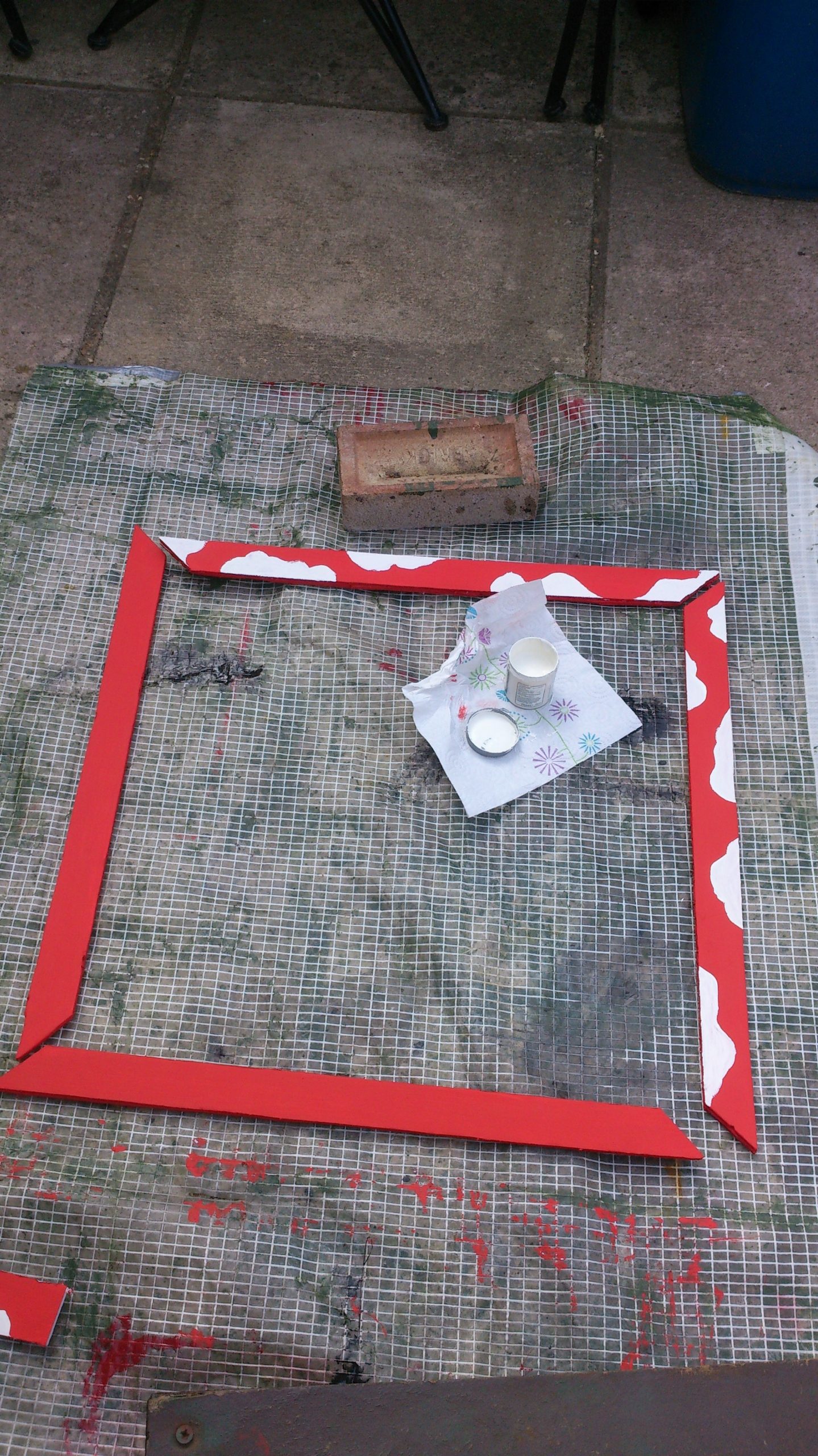 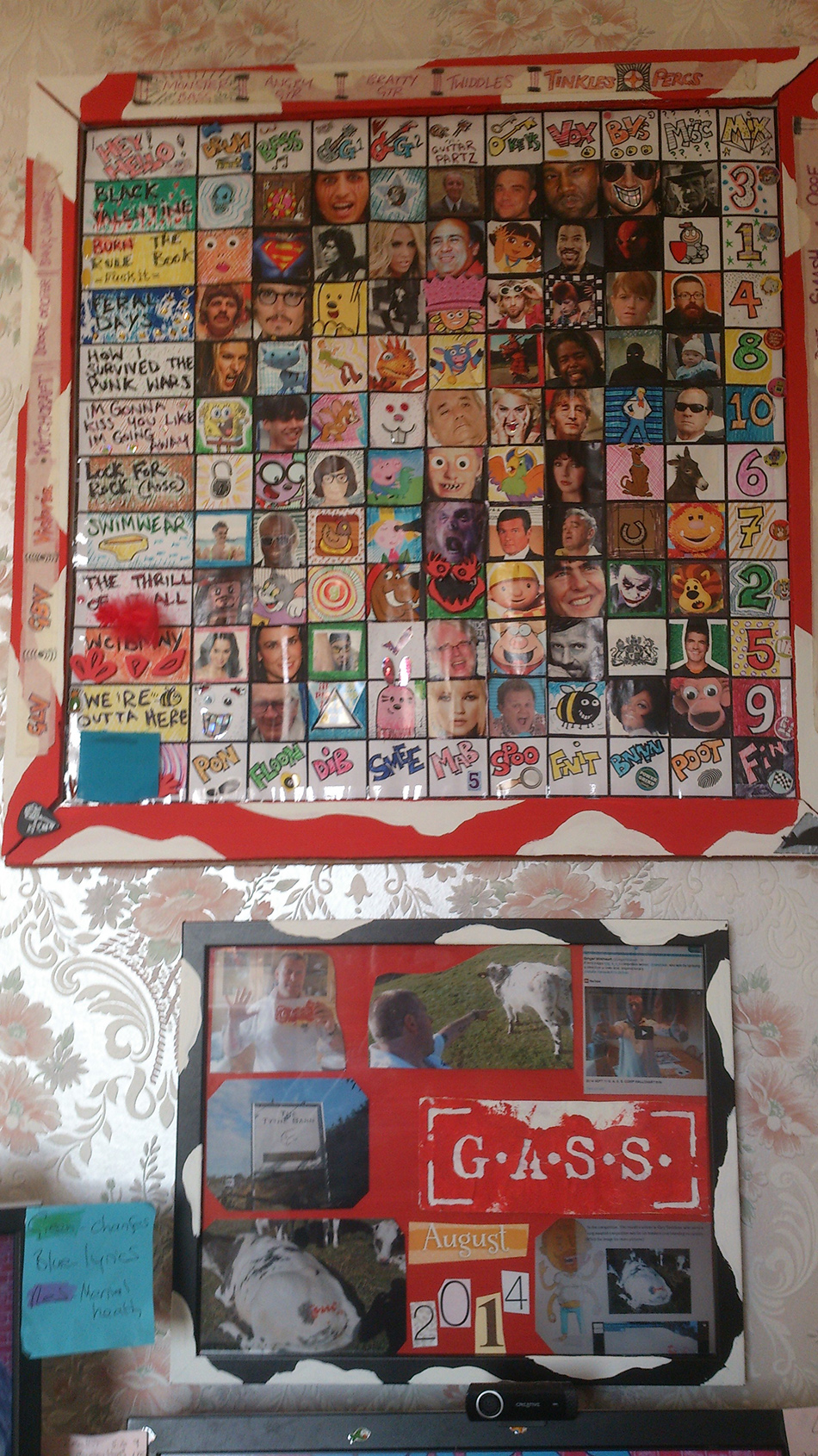 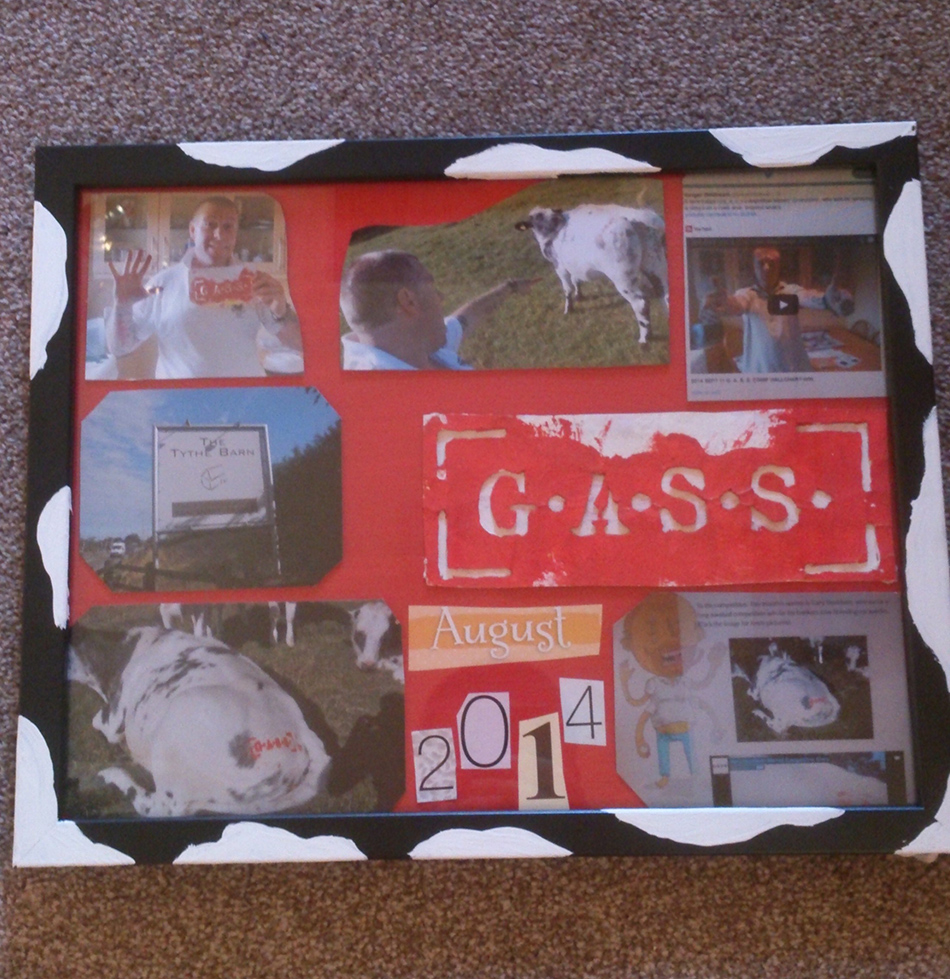