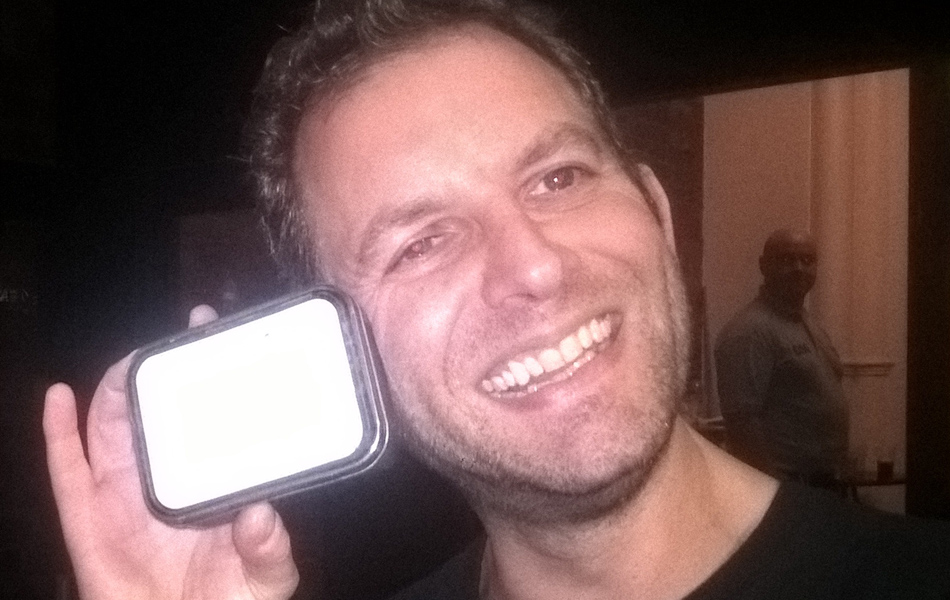 Being in attendance for this gig proved to be quite an achievement in itself as the girlfriend is not (well, wasn’t at the time) a fan of The Wildhearts. I originally intended to take her to New York in November of 2007 for a romantic weekend. However, when The Wildhearts announced in June 2007 that they would be playing a series of shows across America, I proposed that if she let me attend this show, I’d take her for an extra two nights to compensate. Unbelievably, she agreed. And was happy to let my concert partner in crime Rob Swingell (aka The Beard) tag along with his girlfriend. The girls stressed, however, they would not be attending, and would instead go out boozing in Greenwich Village on the evening of the show. This we did not mind. We were going to New York to see The Fucking Wildhearts, man! A dream trip in itself, with a fucking massive cherry on top!

To cut a long story short, we arrived in New York on the morning of Thursday 18 October 2007, did a dogload of sightseeing, had a shedload of ale, and a jolly old laugh. Next day, the day of the gig, we spent the morning on a boat cruising round the Statue of Liberty, visited Ground Zero, and spent some time in the shops. As a last minute check, I nipped into an internet café near Ground Zero to make sure the gig was still a goer. To my astonishment, The Wildhearts website listed that the original show (at a venue called The Hook in Brooklyn) had been scrapped. The good news, however, was that a new venue called The Exit Club had been booked a couple of miles away. Mild panic set in as I had no idea where The Exit Club was. Fortunately, after a frantic fifteen minute internet session, I managed to find all the relevant new information and scrap all the preparation I had done in order to get us to The Hook. Still, no bother!

In the early evening, we popped to Greenwich Village as planned, had some scram, drank some more ale, and then left the girls to it. Myself and Rob then caught the nearest subway from Greenwich Village and headed over to the new venue, The Exit Club in deepest Brooklyn.

We arrived in Brooklyn at Greenpoint Avenue station around 7.00pm after a forty minute journey and headed towards where we thought the venue was. On arrival, the area seemed deserted. We popped into a couple of local shops to ask directions. Nobody had a clue. As we wandered the streets looking for the club, apprehension set in; the darn place could not be located. But, as luck would have it, we bumped into a guy wearing a Wildhearts t-shirt. It turned out his name was Pete, and he had travelled from Oldham on his own for the gig! He too was lost!

As the three of us wandered aimlessly around Brooklyn, it did become clear that we were in the right place after all. A couple of apparent locals (again in Wildhearts attire) had congregated outside an unmarked door on Greenpoint Avenue and, upon enquiring, we found out that the club was indeed here. We’d already walked past it three times, and the Chinese bloke who we’d earlier pestered for directions worked next door! The place was so new that signs had not yet even been erected. Proof that we were in the correct location was confirmed when CJ popped out for a cigarette and had a quick chat with most of us whilst we were waiting. Turns out some of his family lived locally.

A few more people arrived before the doors opened. Strange thing was that most of them were British! Aside from myself, Dingle, and Pete, there was Abi from Leamington, her sister Izzy (who lived in New York), Matt (a journalist and musician) and his partner Cas (both from Essex), Chris from Reading (also on his own!), and around five or six others whose names unfortunately evade me. By the time the doors opened at 8.00pm and we headed to the bar, the Brit contingency had joined forces and was out for a good time! We’d also met quite a few Americans who’d travelled a fair distance, plus a Canadian guy who’d come about 1500 miles!

I shall refrain from talking about the gig in too much detail as in all fairness, it was a pretty standard Wildhearts affair. I’m sure that the people reading this will probably be massive fans of the band and will have no doubt encountered a Wildhearts concert of their own on many an occasion.

Worthy of note, though, were the opening act, a band from London called Drugdealer Cheerleader. They were very similar musically (and visually) to something representing Twisted Sister, Tigertailz, or Love/Hate. Their singer gave us a giggle when he announced that this was the band’s first gig in America and that it was ‘…great to be playing in front of an American audience for the first time’. If only he’d known that around fifteen of the thirty or so people in the venue were Brits!! As the venue slowly filled up, a couple more bands followed Drugdealer Cheerleader, namely General And The Majors and The Matt Truman Ego Trip. By the time a fourth band hit the stage (Children Of The Unicorn), it was close to 11.00pm. I’d promised the better half that we’d probably be back in Manhattan by 1.00am at the latest but, at this point, it was obvious that The Wildhearts weren’t even going to be onstage till gone midnight. Thoughts of being stranded in Brooklyn, missing the last Tube, and getting a bollocking all whizzed through my mind. The mobile phone wasn’t working either, so the basic train of thought was, ‘Bollocks to it. Whatever will be, will be!’

By the time The Wildhearts hit the stage, it was indeed around 12.15am, and the venue was fairly packed with I’d estimate around three hundred people. Myself, along with the other Brits, were already in position right at the front, centre stage. We obviously went ballistic throughout the entire event! The band played for just over an hour and performed:

Greeting From Shitsville
Vanilla Radio
TV Tan
Caffeine Bomb
Everlone
The Revolution Will Be Televised
O.C.D.
Nita Nitro
Suckerpunch
Destroy All Monsters
Sick Of Drugs
Love You Till I Don’t
The Hard Way
Weekend
Rooting For The Bad Guy
Someone That Won’t Let Me Go
29 x The Pain
My Baby Is A Headfuck
I Wanna Go Where The People Go

They went down a storm!

To be in attendance at this event was one of the highlights of my life so far. By the time we got back to Manhattan, it had gone 3.30am. We found the girls sozzled in a bar, but it was so late we couldn’t gain entrance. Not to worry, as they didn’t mind that we had made it back so late – they were just happy we’d made it back at all. They finished their beers and met us back at the hotel about 4.00am.

The next day, Saturday 20 October, all four of us met up with the British gang at another Wildhearts concert, this time on a boat called The Temptress as she sailed around Upper New York Bay whilst the band played. But that is another truly memorable story…