Danny McCormack: Where we talk The Wildhearts, The Main Grains, recording a World Cup song and mental health… 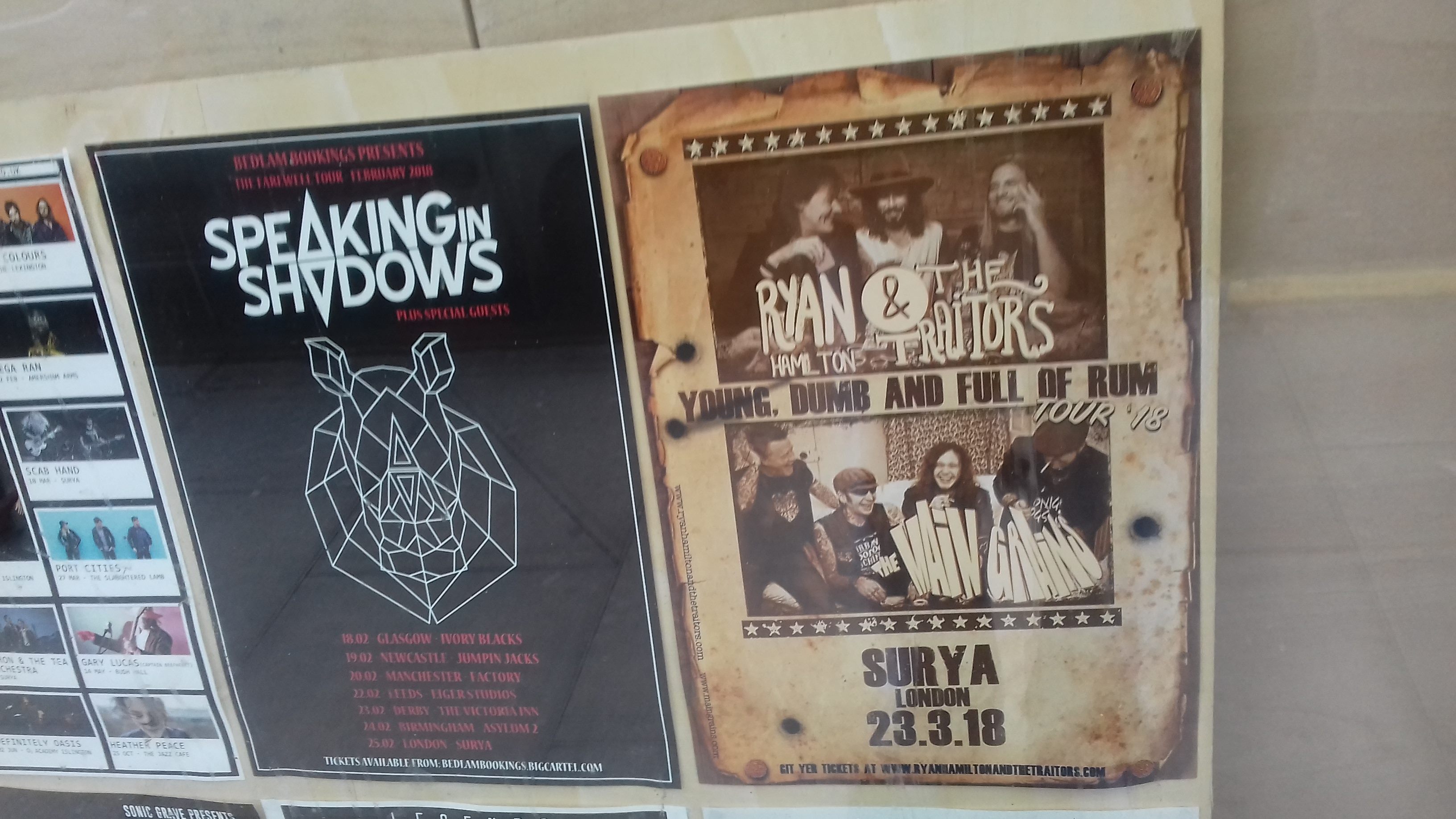 After hotfooting it to the offie to purchase two cans of Guinness for Danny and cider for myself, we find a quietish corner in which to have a chat before The Main Grains support slot on the Ryan Hamilton & The Traitors tour at the Surya venue in London. 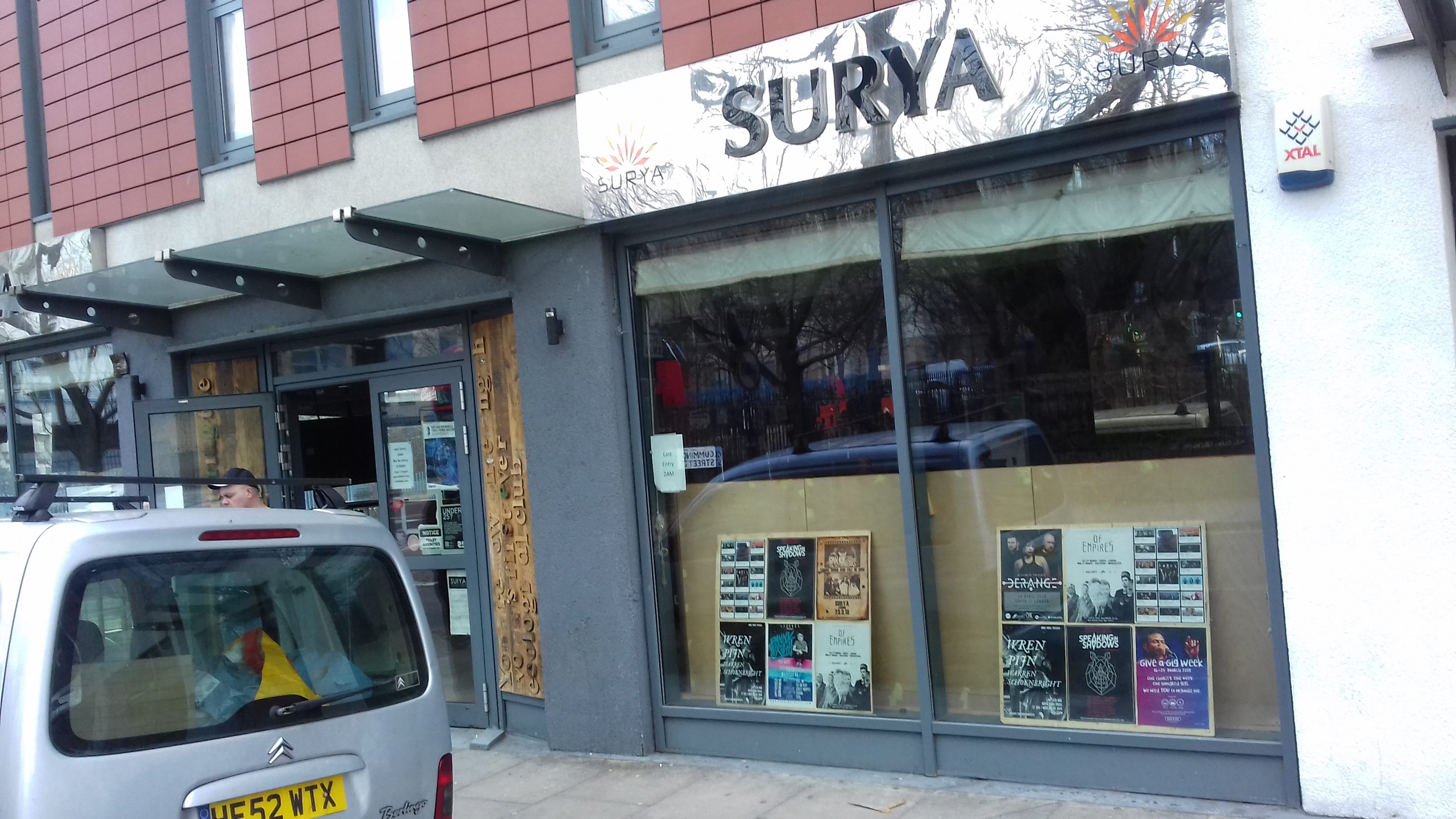 Firstly, I asked good friend and all round Wildhearts nut Kerry (Ten Pin) Bowler if he had a question for Danny.

Ten Pin: What’s it like for your brother Chris being in The Professionals with former Sex Pistol Paul Cook?

Danny: He’s over the moon! I’ve just recorded with Paul as well – a song for the World Cup with Tom Spencer from the Yo-Yo’s, Olga from the Toy Dolls, my brother Chris and Paul Cook. It’s called The Tallywags, ya knackers – it’s an old Victorian word for your cock and bollocks. The Sun are getting behind it!

Me: How’s the tour going?

Danny: It’s going really well apart from losing some van keys the other day and we had to miss Cardiff. It was a bastard ’cause it cost a fortune. It’s tipped the balance for the tour budget. It’s one of those things you know, accidents happen. We searched high and fucking low but we couldn’t find ’em. So we’ve had to hire a van out ’till we get another set of keys sent to us. You’re talking five hundred, six hundred quid with all the petrol, van hire and cars. Apart from that it’s been great: Newcastle and Glasgow – stunning shows! Actually, they’ve all been really good.

Me: So tonight’s the last one? I believe you play ‘Anthem’?

Danny: We haven’t been doing it every night ’cause it’s hard on my throat. My throat can’t take it for eight days in a row, it’ll be shot. I’ll be doing it tonight though probably.

Me: You gotta play it tonight Danny!

Me: It’s been twelve years since I interviewed you last. I think you were going through some hard times: you were no longer in The Wildhearts and had your demons.

Danny: I went twenty seven years being bipolar without being diagnosed, which was fucking hellish – Hell on Earth to be honest. The doctors were hopeless, useless bastards just giving me anti-depressants. It wasn’t till my brother was working with Adam Ant that he saw what Adam was like, and said “Danny, you’re bipolar. Write everything down that you’re going through and take it to the doctors”. So I did that, he read it and said you’re possibly bipolar two. I’ve now got the correct medication and for the last five years I’ve been on an even keel. It’s made us in the present position where I can give up drugs for the first time in my life. I’m nearly three years clean now. When bipolar I took downers when I was up and uppers when I was down, to self-medicate.

Me: How do you see your lifestyle and mindset has changed since being clean?

Danny: It’s totally turned round. I don’t have to wake up and score anymore, which was a chore. Getting the money together, going out and meeting the dealer – it’s a full time fucking job being a junkie. It’s just fucking heartache and getting treat like a cunt. It’s a sad horrible scene that I’m glad I’m not in anymore – I feel wonderful for it!

Me: It was awesome and rather emotional to see Ginger join The Main Grains onstage for three Wildhearts songs at last year’s Halloween Hootenanny. How was it for you?

Danny: It was brilliant! Whenever me and Ginger are onstage together it’s just a magic buzz. I get a real buzz off the bloke, ya know. The crowd went fucking nuts!

Me: In 2002 when I interviewed the whole of The Wildhearts I remember asking you about being back in the band. You mentioned that The Yo-Yo’s were all good and everything but you never forgot about The Wildhearts. Now you’re back with The Wildhearts as well as fronting The Main Grains, may I ask how you’re juggling the two?

Danny: They’re two totally separate things. As long as I keep them separated and don’t cross gigs over or anything, I’ve got time to do both. Ginger and Ritch can only do it for a certain amount of time in the year, so it’s not a full-time thing, but it’ll come across as a full-time thing. Years ago we were taking on the world – now we’re just taking it in our stride.

Me: What does it feel like to return to the fold?

Danny: Brilliant, absolutely brilliant! There’s something right with the Universe when I’m in The Wildhearts. I’m a Wildheart – always have been, always will be. It means the world to me, that band. I was nineteen when I joined and it was my whole life. I would have died for that band… in fact I think I did a couple of times. The crowd chanting my name at Scarborough (Rock in the Castle in 2005) was one of the highlights of my career. It was an awesome brilliant feeling!

Me: Recently, Ginger, CJ and Ritch were rehearsing songs for an album that I believe will be recorded later in the year to be released in early 2019. When will you be joining them?

Danny: They’re sending us stuff to listen to. They live closer to each other, so it makes sense for me to go down on half the days.

Me: Onto The Main Grains then: you have an EP and a mini album out so far – are we likely to see an album in the not too distant future?

Danny: Yeah, hopefully it’ll be out sometime this year, if not then very early next year. I’ve got four more songs to write. I write all the time but it’s going slow because I’m keeping the standard really up there. I’m being my biggest critique and sacking songs left right and centre.

Me: It must be good to be busy?

Danny: Yeah, with a mental health problem, it’s good that I’m busy. Too much downtime and the Devil makes work for idle hands, you know what I mean?

Me: Only too well.

In fear of us both going deep into the subject and losing the momentum I decided to keep things music related – besides, I had a few questions for later in the interview regarding mental health. 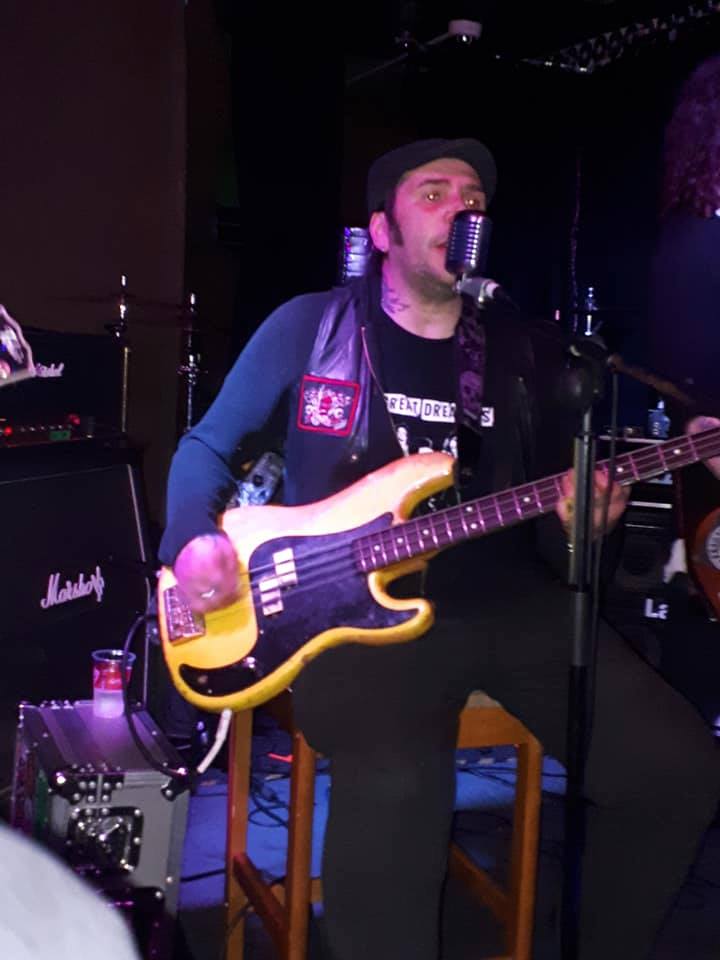 Me: If I’m not mistaken, The Wakefield benefit show for Scott Sorry was your first time performing with The Wildhearts since Scarborough in 2005. Has your body thawed yet after those arctic conditions?

Me: You must be buzzing for the Britrock tour?

Me: By the way, how is the prosthetic? I read that you’re finding it hard to use as it fits to the knee you dislocated at Reading Fest in ’94?

Danny: Yeah, it’s never been the same. I’ve got a twenty five degree bend in my leg. It’s fucked! I’m walking on a damaged leg… it’s fucking killing us. If that wasn’t the case I wouldn’t need crutches now and wouldn’t be in agony and fucking pain. I reckon I could be on crutches for another year. I was in a wheelchair last year, so at least it’s a much better position to be in. I’m not staring at people’s cocks or arses.

One of the many things I love about Danny is his optimism in the face of adversity, which the above comment brings to the fore. Sometimes to be positive and try to have an understanding of your own mental health issues, I think it’s good to look back and see how far you’ve come, so I thought this would be a good point to delve into Danny’s psyche a little. I knew he’d be cool with it as when we spoke in 2006 he was so open… we both were.

Me: A couple of mental health questions if that’s ok? Last year when you had your lower leg amputated and later a stroke, how did you cope with such an upheaval at what must surely have been an emotional time in your life? Did you dip into a depressive state?

Danny: No I didn’t. The doctor said with me being bipolar I should expect a period of down feelings, but it’s never hit us. I’ve just been thinking positive all the time. I’ve been thinking like, I’ve got another one and I’ll get another one.

I mention to Danny that I’ve been depression free for the last year despite having to deal with some challenging moments that in the past may have had a detrimental affect on my mental health.

Danny: I think it comes with age, Gary. I mean you’ve been on this planet for forty five years now, you get older and you mellow a little bit.

Me: I lost three stone last year after gaining weight when depressed for a long period. You know when you had your 40th at The Barfly with The Yo-Yo’s, I bought a t-shirt in medium as I was at my lowest weight in a long long while… but soon after the gig I went through a depressive period and gained three stone, so couldn’t wear it. That t-shirt has just been taken out of the drawer and my goal is to fit into it. Being able to wear it without looking pregnant will be a big achievement and make me realise how far I’ve come. I thought you might like that? 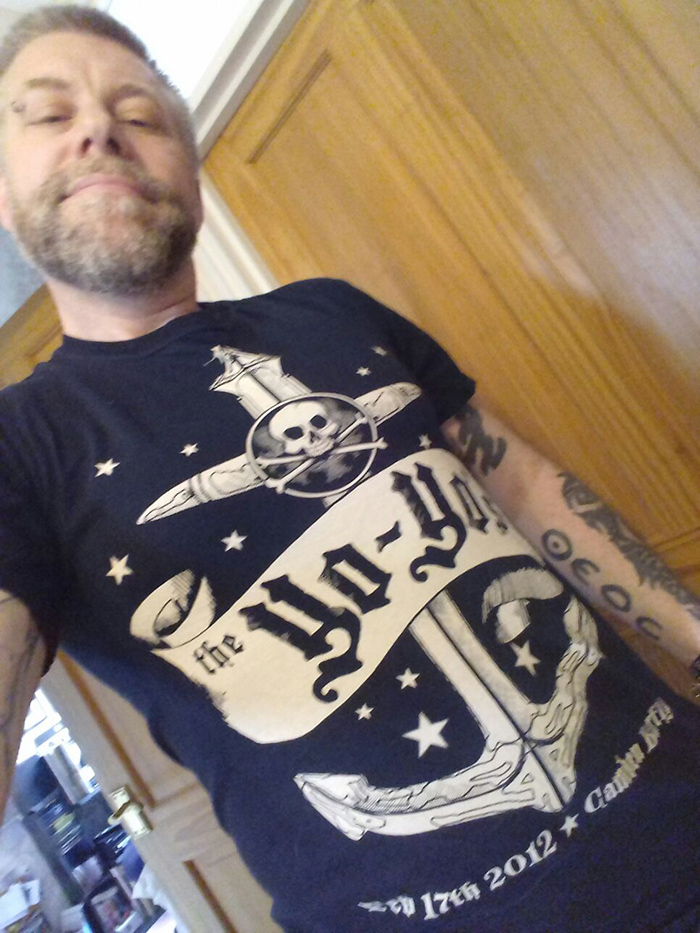 Danny: I do like that, I do like that, ’cause it’s the sort of thing I do: I’ll get into my skinny t-shirt if it kills me, ha ha ha! I put weight on with us being in a wheelchair, I put a lot of weight on, I was eating loads. When I went into hospital for my leg I was still junkie weight. I’d been clean for about a year and half but I hadn’t been eating or looking after myself – I was still having a tickle every now and again, you know what I mean. When I went into hospital I was a junkie, when I came out of hospital I wasn’t – I went from nine and a half stone to fourteen. It’s a big jump, you know what I mean. I haven’t had a habit for between two and a half and three years now – it’s fucking wonderful that I can turnaround and say that!

Me: Do you remember when you had your first bout of depression?

Danny: I remember my first one, yes. I can remember because I had a bad trip on acid. That was my first bipolar psychotic experience. I was totally psychotic with paranoid delusions and depressed with ultra self-hate. It was fucking horrible! I was ill for months and months and months, in fact, years after that acid. I think the acid triggered the bipolar.

Me: Of course there’s still a huge stigma associated with depression…

Me: Let’s lighten the mood a little. I’ll hand it over to you. What should I ask as the last question Danny?

Danny: Oh fucking ’ell, how about what’s the winning lottery numbers? That would be nice wouldn’t it?

Me: Ha ha, yes! I know, just to inflate my ego, what do you think of this wonderful Wildhearts book ‘Zealot in Wonderland this chancer Gar…

Me: Is the cover nice?

Danny: The cover’s gorgeous! I will get round to reading it though… 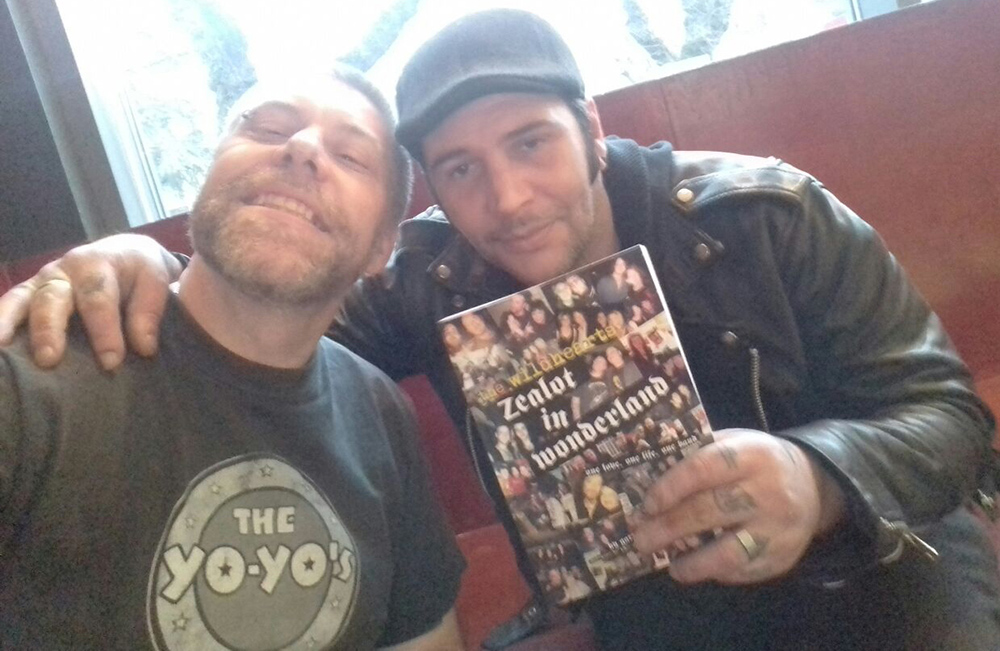 At that we shared hugs and had the usual (off record) post-interview chat. I then went on to watch The Main Grains blistering set a few hours later, where to my surprise Danny displayed another thing I love about him: always thinking of others, he not only played, but dedicated ‘Anthem’ to me.