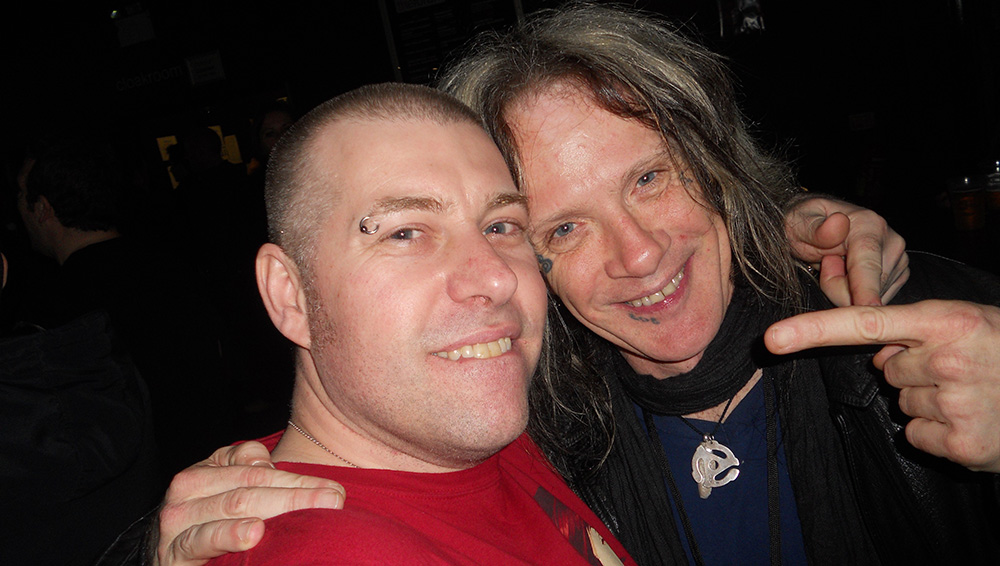 The one that nearly got away. After several failed attempts to interview Alex when I started writing Zealot, we got back in touch via Facebook Chat in September 2011. Our plan was to conduct the interview through Skype, but this was also laid to rest as our schedules wouldn’t allow it. It was decided that the only way the interview was going to happen was if I sent Alex the questions in an email. Not the way I normally like to do things but at least it seemed it was going to happen… or so I thought…

… Sixteen months later and several nudges in Alex’s direction and still I had no interview. Just when I had finally given up any hope, a chance meeting and friendly chat at Ginger’s 2012 Birthday Bash (where Alex had flew over at the last minute to perform) brought the matter to the fore.

So here it is – a brief but often interesting questions and answers session with Mr Kane.

Me: Is that blood on your head in your Facebook profile picture? If so what happened?

Alex: It was either repeatedly bashing my head with a blunt metal object or something much worse.

Me: When did you first embrace music whilst you were a child?

Alex: Honestly, it stopped me from killing myself (literally) in my early teens. It’s been my medication ever since. My teen years sucked!

Me: What are your views on band and fan interaction? Like an artists privacy? The dynamic between the band and their fans?

Alex: Anyone who would be so insane as to care about me and my shit is welcome to know as much as they want. Counter pointedly, I expect them to welcome my stalking tendencies of them as well.

Me: Has there ever been an occasion when a fan of Anti Product has pissed you off? Or visa versa, have you ever annoyed one of your favourite artists when you were younger?

Alex: Yea and I still do to this day. I told Rick Nielsen of Cheap Trick his band was starting to suck when they started to suck in the 80s. Then I told Steve Clark of Def Leppard when ‘Pyromania’ was #2 in the US chart, #2 wasn’t enough. I thought I was bonding. Turns out I was just a moron so when someone pisses me off I assume the same about them.

Me: What are your feelings about fans getting onstage when you’re performing?

Me: Do you remember at the Clam Abuse, Camden Dingwalls gig in London, someone got onstage? And if so what was your immediate reaction? That was me by the way.

Alex: Ahhhhh, no shit. So you picked my pocket. I was introduced to true gig insanity during my stay in the UK. I had never experienced the lunacy and connection as we just don’t do that so much here. In England, everyone in the room is part of the gig. Here, well, you watch a show like it’s on a flat screen. Not all shows and obviously hard core gigs go off but on the whole it’s more like, well entertain me.

Me: What’s the weirdest thing you’ve seen or done at a gig, as a punter or playing in a band?

Me: What do you think is more important, the quality of musicianship or entertaining the audience?

Alex: You need a certain standard of competence, Steve Jones was and is a GREAT guitar player, Pete Townsend is an amazing musician and song writer but if you ain’t sweating and hopefully covered in blood and vomit by the end of the show, I kinda feel you coasted. Both players and attendees.

Me: Do you think there is any better art form for self expression than music?

Me: How did Clam Abuse come to be? I remember Ginger saying he needed money to pay off debts he owed to a gym.

Alex: Yes and it was that gym that we met at so I think the debt may have been more metaphorical.

Me: Do you remember when Ginger was arrested for calling a police officer a ‘Fucking Nazi’ outside a venue, because the police officer ordered Ginger to move the tour van? What are your thoughts on the situation?

Alex: Yea, I was actually standing next to him and our TM, Gigs, going, dude?!?!?! I learned a lot from that, about England, about perception, about standing your ground and the benefits derived there from.

Me: Who was doing the spanking and who was being spanked at the end of the Clam Abuse album?

Alex: I think the spanker was Theodora Potsides, an absolute one off and unless I forgot, it was a Medieval Babe getting donkey punched. We used a 421 mic, I believe. Hope you liked the choice as there was no YouTube nor manual for girl on girl spanking recording techniques.

Me: What was the recording like for ‘Stop Thinking’?

Alex: Pretty much like the title would suggest but more high.

Me: What would you say is your proudest moment in your musical career so far?

Alex: Yet to come but winning the ASCAP writer member award for best song of the year in ’09, I think it was, was killer. I’m scoring movies now as well so that’s an exciting new challenge to try to not fuck up.

Me: Is there anything you regret?

Alex: Becoming a whore rather than following my instinct for self preservation through self-destruction.

Me: Is it important for you to keep up rock ‘n’ roll traditions?

Me: Is your penis now permanently luminous after spraying it so many times? It looked amazing onstage by the way.

Alex: Thanks for noticing I’m pretty sure I think. God, I miss the UK. This is literally the best question I’ve ever been asked in an interview ever!!!!!!! Fuck me running. Genius!!!! Yeah I never need a flash light ever again and it does bring a new meaning to the word flashlight.

Me: I saw you perform with Ginger at his birthday gig in 2009. How was the gig for you?

Alex: Amazing and it was nice to be the start of another first. The guy, almost in spirit of myself, truly never ceases to amaze me, btw. Like, yea, I get mass shit done but he is just ridiculous and to be bigger and more famous in your late 40s and unashamedly so than you’ve ever been. C’mon!!!!!

Me: Am I correct in saying you were going to appear on Ginger’s triple album project?

Alex: Yea we were gonna do a new tune (not Clam Abuse but rock ‘n’ roll) but scheduling and timing eluded us.

Me: Do you think you will ever work with Ginger in the future?

Alex: It’s obvious he still needs my help……… ahhhhhhhh. I’d love to as I do genuinely and begrudgingly find him one of the most inspirational dudes I’ve been lucky enough to work with.

All the best,
Alex