The Bullshit Goes On… and on…

Out of the blue, Ginger announced an acoustic gig at The Railway Inn, Winchester. Before I got my shit together and purchased a ticket, the gig sold out. I immediately posted my woes to the All Things GiNGER WiLDHEART Facebook group and mentioned that, if there was a spare going, I was the man to have it. My post was more an act of letting off some steam than anything else; I certainly didn’t think anyone would reply in the positive. Not an hour later, Duncan Wilson (the guy who did the wonderful love rocket artwork for Ginger’s first single of his G.A.S.S. campaign) replied in the positive. Thanks Dunc, you’re a diamond!

The timing couldn’t have been better as I’d just received the first batch of one hundred and twenty copies of my book from the publishers. Getting in touch with Jane (Ginger’s girlfriend/manager), she said she would be hanging around before the gig so I could hand a copy over for her to pass on to Ginger. The last time I’d been in contact with Ginger about Zealot was the disastrously awkward chance encounter I had with him outside The Marr’s Bar in Worcester on the 1st March 2008. I was certain that this time things would run as smoothly as an alabaster good luck charm lying on a bed of silk: my book was complete and I’d organised a meeting beforehand.

Upon walking into the pub part of the building, I scanned the room for Jane, but there was no sign. After five or ten minutes chatting to my gig buddies, Ginger came in and walked right behind me. Not knowing of our previous exchange, a few urged me to make myself known and hand over Zealot. I kept shtum, finally handing it over to Jane a little while later. I asked if she would be so kind as to keep me posted on how Ginger was getting on with it. A couple of days later, I received a message from Jane saying that she had started reading my book to Ginger on the drive back home to St. Helens – they were both impressed. I can’t tell you how made up I was! I then imagined different scenarios of Jane reading to Ginger: in bed late in the evening; while Ginger was taking a bath; walking their dog Maggie; and various other instances. A couple of weeks later, I received an email containing Ginger’s summation (featured at the start of the book). It really blew me away. Writing Zealot had been such a long journey with many highs and lows, so the fact that Ginger had not only read the finished product, but was an advocate of its release, meant the world to me. I couldn’t have dreamt a more fitting conclusion to this chapter of my life. It turned out I didn’t have to…

When Ginger announced he was playing an acoustic gig at The Marr’s Bar, Worcester, I had to go. Seeing Ginger play acoustic so soon after The Railway Inn show would be reason enough; however, that wasn’t the only reason I was buzzing for this one…

Martin and Andy were once again my gig buddies for this re-run of the 1st March 2008 gig. We even stayed in the same Travelodge and visited The Pig & Drum pub – the clientele and choice of music had changed somewhat and we comically hotfooted it out when the resident DJ hit us with a barrage of drum and bass beats. After finding somewhere that didn’t render us senseless, we were suitably oiled up for a showdown at The Marr’s. It seemed that both Ginger and I were expecting a rematch of sorts. When advertising the gig Ginger tweeted:

In this night we will exorcise the demon of my last Marr’s Bar appearance.

Around the corner from the venue, we walked past the exact spot where, not nine years ago, I had my disagreement with Ginger. This instantly brought back memories of asking for that face to face interview. Looking back, I don’t even know why I was so obsessed with getting one, nor why it even mattered. 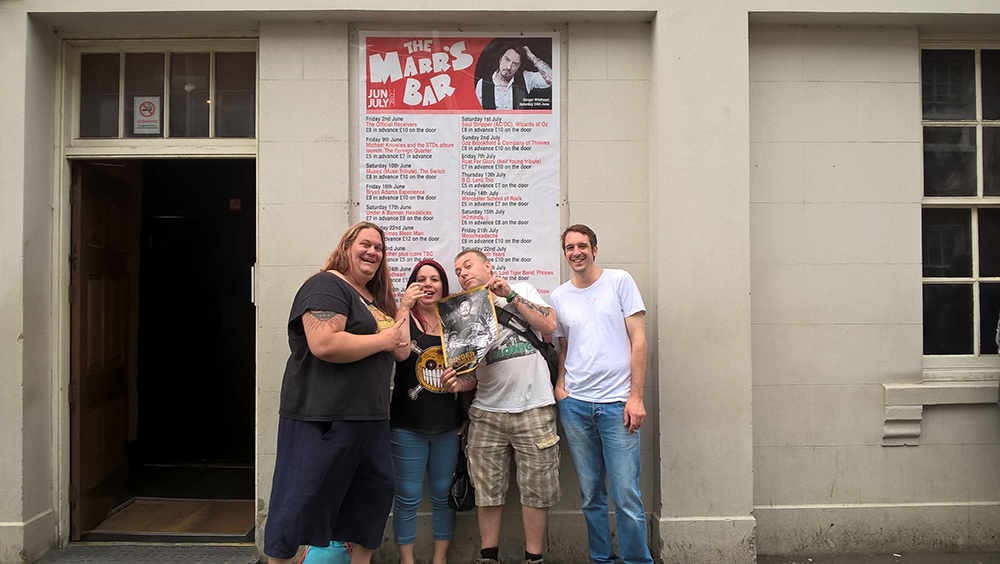 From the left: Aleutia, Rachel (who I first met at the Winchester gig), me and Andy.

Upon entering the venue and looking at the stage, it felt surreal that Kiki and I had been up there behind Ginger bashing away on triangle and güiro. As soon as Ginger stepped up to the mic and started talking, the atmosphere was markedly different from the last time. Polar opposites don’t get any farther apart than this night’s performance and the aforementioned one; tonight was full of smiles, laughter and, of course, awesome music. Instead of leaving the stage and coming back for the encore, Ginger used the time to communicate with his audience. After chatting for a minute or so he announced, “If anyone can buy me a whisky, that’ll be really cool. A Jameson or something like that, that’ll be fantastic, thank you.” With that, I was off like a bullet! I didn’t even think. My legs had suddenly found the ability to move before my brain had instructed them to do so. The room wasn’t rammed, so I was able to head (run) straight for an empty bar. To my surprise, Jane was already there. After asking her how Ginger preferred his favourite tipple, I made it clear that this one was definitely on me. I then proudly proclaimed, “A double Jameson please, barman!” Elixir in hand, I wove my way through the crowd to the front of the stage where Ginger was still chatting to his audience. Then, finally, nineteen years after spectacularly knocking Ginger’s drink out of his hand at the ULU, I got to offer him the replacement. Leaning forward, I handed it over while he was in mid-sentence. Then, as if the audience didn’t exist, we had a short discussion:

Me: “I’ve finally bought you a drink, Ginger. You know, in the book. Finally got you one, my friend!”

Then, to the mic, Ginger announced, “This fella here, he’s wrote a book called Zealot in Wonderland and I suggest that you all read it. It’s very very good.” With that, Ginger raised the double whisky I’d finally bought him and declared: “Gary Davidson everyone! Thank you, mate.”

As Ginger was showering Zealot with praise, I started to well up and burst with pride. I don’t often pat myself on the back for accomplishments…but I did it! I wrote a book about The Wildhearts, had it published and people were now reading my words. If I had forever to fabricate the perfect accompaniment to Zealot’s release, I couldn’t have come up with anything better than what had just occurred. What a turnaround from Ginger announcing at The Garage gig, “I’d drink to ya, but that guy didn’t buy me a drink.” Not only did I buy Ginger that drink, but he was toasting me and my little book with it. 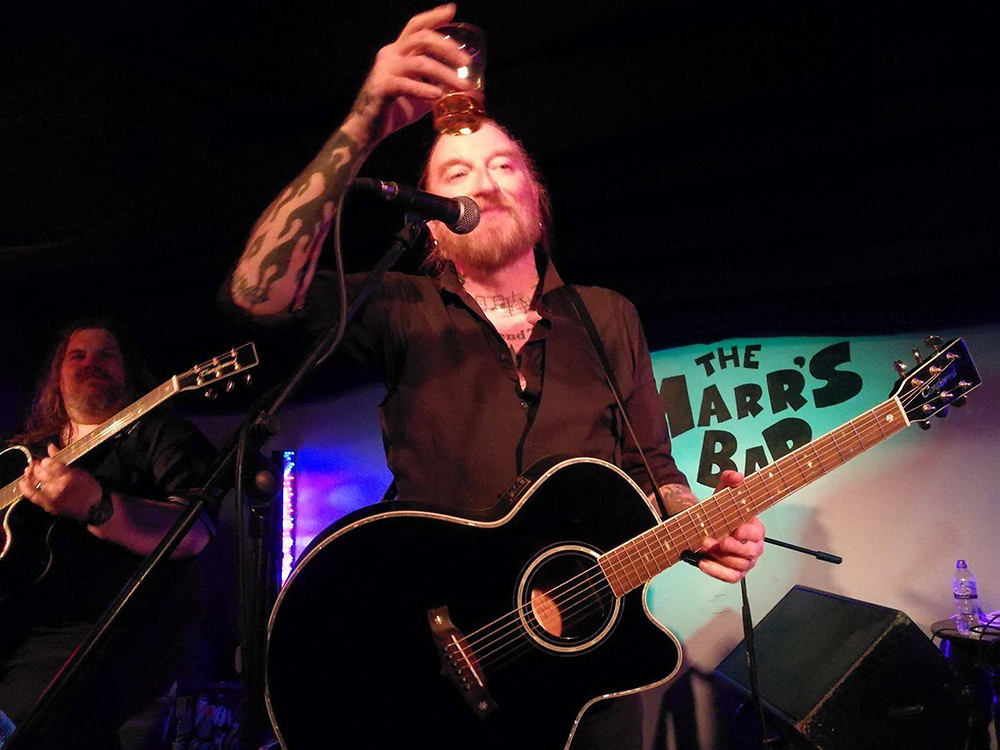 Ginger’s toast, however, was symbolic in that it represented, not only the completion of my book, but also the fact that those words wouldn’t exist were it not for the music Ginger created. And the gigs wouldn’t happen but for the crowd around me. The music, the gigs, the people, and the wonderful times are all born from the very first words and guitar strums Ginger produces. There’s no separation between artist and fan; one wouldn’t exist without the other – we are as one.

Upon returning to Martin and Andy in the centre of the audience, I suddenly realised the importance had never really been in obtaining an interview for Zealot, but in getting some sort of acknowledgement from Ginger on my book as a piece of art, something of worth; that he’d taken something from it in the same way I’d been doing from his music over the past twenty-five years. We were sharing personal experiences through songs and words.

More gems saw the crowd in fine voice before an emotional ’29 x The Pain’ ended the set with Ginger declaring, “This has been a fucking fantastic night, thank you so much!” In Zealot I mentioned ’29 x The Pain’ being bittersweet in that it is a song that unites the whole room yet, more often than not, is a signal that the night has come to an end – and tonight was no exception; at least as far as music was concerned. Leaving Martin and Andy chatting at the bar, I walked over towards the merch table to talk to Aleutia and Rachel, who I’d previously met at the Winchester gig. Little did I know that when a guy poked his head around the backstage door and counted a few people in, Aleutia and Rachel would be among them. I’d royally fucked up my opportunity to meet Ginger after the SG5 gig way back in 2000, so I sure as hell wasn’t gonna be a fuck-up again. With that in mind and a friendly nudge from Aleutia, I sauntered in with consummate ease.

There were around a dozen or so folk chilling and having post-gig drinks. I managed to grab a chat with Ginger, who was in high spirits and waxing lyrical on everything from Ed Sheeran to trying to persuade me to write another book. I also spoke to the lovely Givvi Flynn who’d guested on a few songs earlier. She took a copy of Zealot off my hands that I happened to have in my bag – it gave me a buzz to think that someone I respected as a singer would be be reading my words.

An hour or so had flown by before Jane announced it was time for everyone to skedaddle as they would be leaving soon. Before saying my goodbyes, I asked Ginger if I could grab a photo of us together. Finally, I managed to get a relaxed pic with the main man after the last awkward effort at the O2 Academy Oxford.

Backstage with the main man and his Marr’s sticker

The last thing I saw before leaving through the backstage door was Ginger with a big smile, throwing his arms around Jane. It was great to see him on top form, on and offstage alike. For so much good to happen in one evening was a little unbelievable – but, believe me, it happened.

It’s a shame Kiki wasn’t there to experience this wonderful evening. I did bring her back a souvenir, though, in the shape of an ‘I’ve played at… The Marr’s Bar’ sticker… well, sort of. Having seen Ginger sporting one, I asked around and found out that the barman was in possession of a few. After explaining about our rather stellar performance nine years previously, he kindly placed one of the little fellas in my grateful palm. Upon returning home, I scanned the sticker and made two humongous printouts. After attaching them to card and adding the photo of us at The Marr’s Bar to the other side, two personal Marr’s lollipop sticks were created. A fitting end to an unforgettable experience and an apt alternative ending to Zealot. 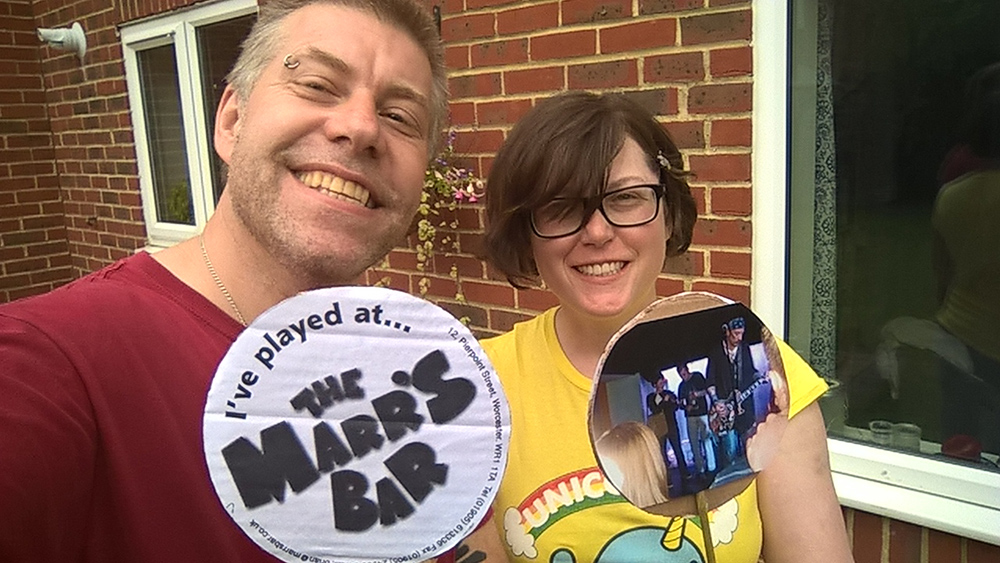 Myself and Kiki with our Marr’s lollipops