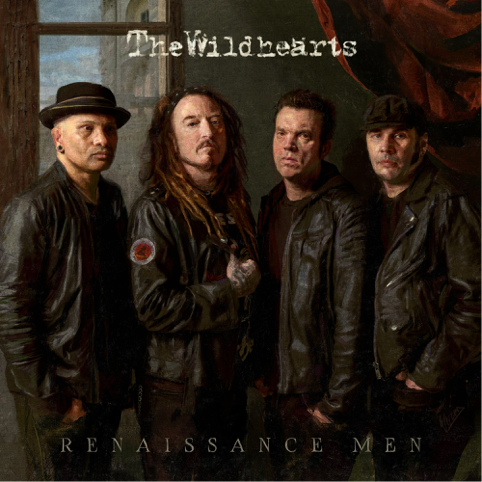 If riffs and choruses could kill, upon the release of ‘Renaissance Men’, The Wildhearts will be deemed mass murderers: riffs are piled on riffs and choruses soar throughout. Before the blistering finale of ‘Pilo Erection’, Ginger Wildheart faintly proclaims, “1, 2 fuck you”. It’s the quietest moment on an album of unquiet moments – where anger, frustration, integrity and blind determination are peppered throughout. It’s been twenty-five years since this line-up has recorded together: Ginger, CJ, Danny and Ritch have never sounded so vital.

For anyone aware of the turbulent history surrounding The Wildhearts, their name alone followed by ‘new album release’ is capable of inducing: astonishment, giddy excitement and head to toe goosebumps. Since their previous long player in 2009, there’s been talk of a follow up on several occasions, but internal frictions, mental health and other factors have acted as a brick wall. A punk album was discussed and this is what we have here, albeit one with crystal clear production and a direct ‘live in the studio’ feel. Thank heavens then that after a decade in the waiting ‘Renaissance Men’ delivers with the force of ten nail bombs exploding awesomeness far and wide. This isn’t hyperbole, this is The fucking Wildhearts and they’re back in your lugholes with one of their best offerings yet. That’s no mean feat when faced with a back catalogue including genre bending classics such as ‘Earth vs’ and ‘Endless Nameless’.

On the joyous title track, Ginger proudly bellows The ’Hearts return with, “We’ll rock ya like a boomerang” while also giving a middle digit to the doubters in, “Some thought that we were through/Some prayed that we were too!” It’s as much a brotherly pat on the back to themselves that they’re all still alive after a fraught thirty-year existence, then anything else. Frank Turner – who has previously guested live on lead vocals with The Wildhearts – is all over single ‘Let ’Em Go’. Standout line, ‘The Only thing I ever understood/Was to take the bad and to make some good’ cements the durability of this band of brothers.

Regarding musical influences, in a recent interview Ginger remarked, ‘I don’t wanna reinvent the wheel, I like the shape of the wheel’. This has always been evident in Ginger’s work and nothing has changed here: Quo, Motörhead, Ramones are all honoured while The ’Hearts add their own blend of mayhem into the mix. Regarding the state of mental health services in the UK, with ‘Diagnosis’ the tip of the hat unequivocally goes to AC/DC and Quo. It’s a humdinger of a tune with primal outburst, “You’re not an animal!” ripping puncture wounds into the consciousness.

‘My Side Of The Bed’ may just win out as the highlight of an album bulging with brightness. From the off we are thrown into a section resembling the erratic material from Ginger’s experimental ‘Error 500’ album. Chops, changes and time signatures galore are backed by Ritch Battersby’s solid drumming to create a head-spinning introduction. In complete contrast it effortlessly slides into a verse melody of pure pop territory, then – upon the three minute mark – we’re once again thrown into a manic breakdown of discord – pop-brutality at its finest!

The Wildhearts always finish an album with a bang and the aforementioned ‘Pilo Erection’ doesn’t buck the trend by rounding off this beast of a record with a thumping beat and gang chants aplenty.

‘Renaissance Men’ would achieve a sweet ten out of ten were it not for its length just falling short of the forty minute mark, therefore failing to soundtrack the whole of my bi-weekly six mile run. Pedantic tendencies aside, in a world run on justice, it will be the roaring success The Wildhearts deserve.